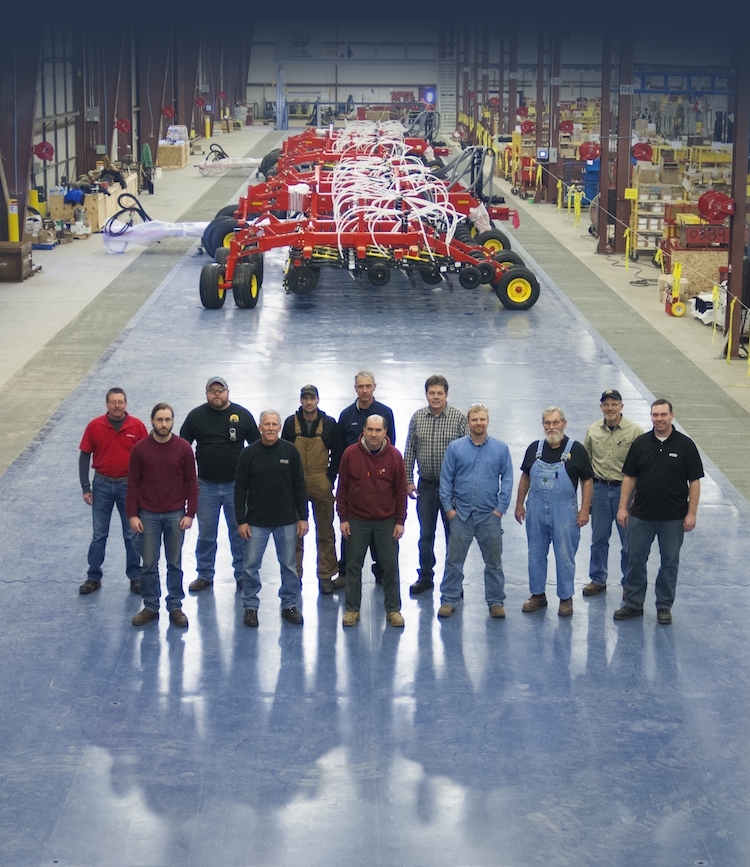 Dec. 16, 2015 – Located in the very heart of Canada’s Saskatchewan farm country in the small town of St. Brieux, is Bourgault Industries, which since 1974, has designed, manufactured and distributed farm equipment for seed planting and tillage. Recently, the company added 184,000 sq. ft. of production area to one of its several manufacturing facilities in St. Brieux. The main goal of the expansion was to consolidate its tillage product line into one manufacturing facility, and increase efficiency by reducing the handling and transporting of parts.

Like many farm equipment manufacturers, Bourgault’s equipment is not only built to be heavy-duty and durable, but very large in size. Its tillage equipment can vary in size up to 125 ft. in width, weighing in at over 75,000 lb. Assembly-line systems, conventionally employed for large equipment — such as drag-line conveyors that move products between stations or cells where specific tasks are performed — lose efficiency, productivity and safety when dealing with assembled-equipment requirements of such large size.

The manufacturing of Bourgault’s tillage equipment is segmented into two different sections. The framework is welded together, powder coated, and then hydraulic cylinders are installed in one section of the plant. This assembly is then moved to another section of the plant where ground openers, fertilizer and seed dispensing systems, and other options specified by customers, are assembled and tested. It was in this assembly stage where Bourgault engineers confronted their biggest challenge in designing a more efficient and streamlined system to integrate into its newly-expanded facility.

Engineering an ultra-large-scale moving-floor assembly line
“We conducted considerable research on different systems for assembly of our tillage equipment,” said David Konopacki, lead engineer with Bourgault. “We consulted with a number of system manufactures, but none could provide a solution to meet our needs, because the sheer size and weight of our tillage equipment exceeded their systems’ capabilities.”

After assessing many different options, Bourgault’s internal engineering team, led by Konopacki, determined that a moving-floor assembly line would deliver the best throughput volumes and cost efficiencies for the company’s needs. The idea was to have the moving floor not only support the tillage equipment during assembly, but to also have it support the kitting systems and parts to be assembled, as well as the workers doing the assembly. By the time the tillage equipment reached the end of the assembly line, it would be completely assembled and tested, and ready to be discharged from the moving assembly floor, and destined for warehousing or shipping.

To facilitate bringing this design concept to fruition, Bourgault brought in PFlow Industries to co-engineer and build the moving-floor assembly system. Working in tandem, the PFlow and Bourgault engineering teams came up with an ultra-large-scale moving-floor assembly system. The design utilizes a string of 25-ft. x 10-ft. wheeled carts, with a working surface of steel plates to support the tillage equipment and the workers performing the assembly functions. These 37 cart segments were designed to be queued end-to-end to form a continuous 370-ft. long x 25-ft. wide floor, which would be pushed along on rails by hydraulic cylinders. As the carts reached the end of the line, the completed tillage equipment would be rolled off from the assembly system. The carts would then be lowered, and transported underneath the assembly system back to the front of the line to be reused.

“PFlow initially caught our interest because of the company’s existing product line of vertical lifts,” continued Konopacki. “We were looking for a solution on how to lower the carts down underneath the system once they had reached the end of the line, and how to raise the carts back up, after being transferred underneath to the front of the system where they could be reused. Not only was PFlow able to design a custom downlift and uplift solution that fit our needs, but the company also engineered the entire moving-floor assembly system, based on our initial design concept, then manufactured and installed it.”

Engineering on the project was started in July 2013, in tandem with the design of the building site. Since the assembly surface of the moving-floor system was designed to sit level with the manufacturing plant’s floor, virtually the entire system resides below floor level. A 496-ft. long x 32- ft. wide x 9-ft. deep concrete-lined pit had to be constructed when the foundation of the building was laid, to house the system. By February 2015, the moving-floor assembly system, consisting of almost a million pounds of fabricated steel, was fully installed and operational.

Mechanics of floor movement
The moving-floor system utilizes 37 wheeled carts at any given time on the working surface. The carts ride along on an underneath treble-rail system. An additional nine carts are simultaneously in transition at the ends of the floor, and being transported underneath the system.

The carts, which weigh in at 9,000 lb. each, are not propelled individually, but instead, the first cart is pushed using an innovative pair of servo-controlled hydraulic cylinders that propel the entire line of carts. Each pusher incorporates position feedback that is fed to a PID servo-hydraulic controller enabling precise control of position, velocity and acceleration of each pusher.

While the first pusher moves the string of carts at a constant speed, the second pusher extracts the next cart from a front-end vertical lift (which brings returning carts up from below the system), accelerating it to catch up to the moving line of carts. The second pusher smoothly matches the speed of the line, and ultimately takes over moving the entire line at the same established speed. Once the second pusher has control, the first pusher returns to the front end of the string of carts, and then smoothly takes over moving the string again. The second cylinder now moves to once again extract the next cart from the front-end vertical lift and accelerates it to catch up to the moving line of carts. This sequence of synchronized handoffs between the two hydraulic pushers is repeated over and over to continuously move the floor surface.

“This synchronized handoff of the hydraulic pushers is a key feature of the design,” said Mark Webster, vice-president of engineering at PFlow. “We looked at many different ways of accomplishing the movement of the floor. The tillage machines impose multiple 20,000-lb. point loads to the moving surface. Because of this, and other unique characteristics, conventional assembly line systems such as tow conveyors or flat-top conveyors were quickly ruled out as options.”

“Each cart contacts adjacent carts at a single contact point, mid-point of the width,” continued Webster. “This arrangement allows each individual cart to follow the rails in sequence, eliminating the need for highly accurate rail alignment and adjustment of contact points. The carts remain in contact entirely due to the backpressure created by the normal friction in the system. Deceleration of the moving floor is precisely controlled to be less than the normal deceleration due to friction, such that the carts never lose contact with each other during normal operation.”

The speed of the moving floor is user-selectable, ranging between 0.125 ft. and 3.25 ft. per minute, effectively taking between 1-3/4 hours and 45 hours for the floor to make a full transition.

“The cart return system must run at a much higher travel speed than the carts making up the working floor system,” explained Webster. “Many methods for transferring the carts from one zone to the next were considered, such as tow conveyors, slat conveyors and pushers, but none of these systems proved efficient enough for our needs.”

The engineering team did select a return-cart drive system which propels the cart along crane rails underneath the moving floor. The system’s technology, manufactured by OCS IntelliTrak, uses a spinning tube driven by a geared electric motor as the driving mechanism. Spring loaded elastomeric wheels on the bottom of the carts engage the spinning tube at a 45-degree angle, essentially operating as a friction screw to propel the carts along the rails.

Safety
“This moving floor was designed with stringent safety considerations in place,” added Konopacki. “Deflection of the adjacent floor carts during maximum loading conditions is limited to no more than one-eight inch to avoid presenting a trip hazard to the workers. A safety latch system is incorporated that will prevent the carts from separating more than 1/4 in. in the event of an abnormal incident, and to protect personnel on the moving floor. There are no pinch points, chain lugs, hooks, or carts with exposed wheels. It simply consists of a flat moving surface.”

The entry and exit ends of the moving floor are protected by physical guards, preventing access to the transfer areas. A light grid warns the users if an object or person is getting close to the end of travel, and a safety light curtain, further downstream, generates a system fault in the event of interruption, immediately shutting down all motion.

Controls
The control system incorporates an Allen Bradley Micrologix PLC for the control logic, and a Delta Computer Systems servo hydraulic controller to control the hydraulic pusher motion and synchronization. Ethernet IP is used for communication between the various controllers, and to communicate instructions to and from Bourgault’s production control system.

A virtual private network (VPN) router has been added to allow remote access by PFlow technicians for trouble shooting, adding program features, or updating the screens on the four human machine interface (HMI) touchscreens that provide user control. Password protection is provided to allow access to additional screens for maintenance, troubleshooting and manual control of individual motions. A detachable HMI is also supplied to be used in the lower pit area for maintenance, allowing technicians to control the various motions manually from within that area.

Performance
This system allows for the efficient assembly of Bourgault’s tillage equipment by providing a method for workers, tools, components and materials to move along with the assembly. Although the system has just gone into operation, Bourgault estimates a productivity increase of 30 per cent, due in large part to the ability to stage components and materials along the line at the specific point when they are needed, and to have them travel along with the tillage equipment.

“By any standard, Bourgault’s moving-floor assembly line is an extraordinary system,” said Webster. “Because of the simplicity of the servo hydraulic pusher system compared to conveyors or individual drives for each cart, this system offers significantly improved cost verses performance as compared to conventional methods of moving large machines during assembly. And because of the fewer moving parts compared to such systems, maintenance costs and downtime will be considerably reduced.”

The moving-floor system has the flexibility to add different Bourgault product lines, even with weight increases, if desired. And it has the ability to match the speed of the moving floor to the rate required for the assembly of different equipment.

“Our research shows that nobody has anything else like it,” said Konopacki. It is quite unique. Although we have yet to integrate our full production processes with it, all indications are that the system is running as expected, and working out very well for us.”

This feature was originally published in the November/December 2015 issue of Manufacturing AUTOMATION.