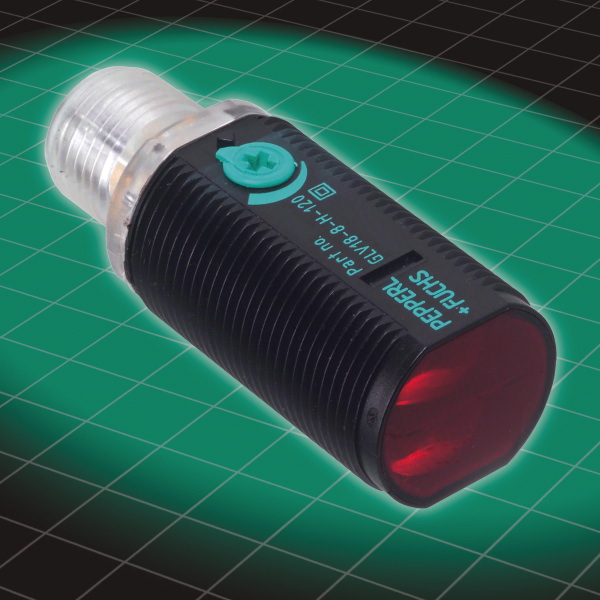 Pepperl+Fuchs GLV18 Series photoelectric sensors are now available in background suppression models, which feature a mechanically adjustable sensing range cut-off that enables detection of all colours at distances up to 120 mm. Black and white test objects are seen to within six percent of the same distance. The sensors come in an industry-standard M18 threaded cylindrical housing that is up to 50 percent shorter, and with up to 50 percent lower power consumption than many competitive models, the company says. The sensors have the ability to ignore objects that appear beyond the object to be detected. Every GLV18 sensor includes a flush-mount bracket that allows for a tool-less, unobtrusive means of mounting the sensor on a conveyor. Ball-and-swivel and half-clamp mounting brackets are also available to facilitate precise positioning of GLV18 sensors. Status LEDs are highly visible and placed in dual positions, 180 degrees apart on the housing, for increased visibility. The series is suited for use in material handling applications, primarily as a conveyor sensor for the reliable reflector-less detection of cartons, totes or cases through the side-wall of a conveyor. They are also designed for use in packaging applications.
www.pepperl-fuchs.us