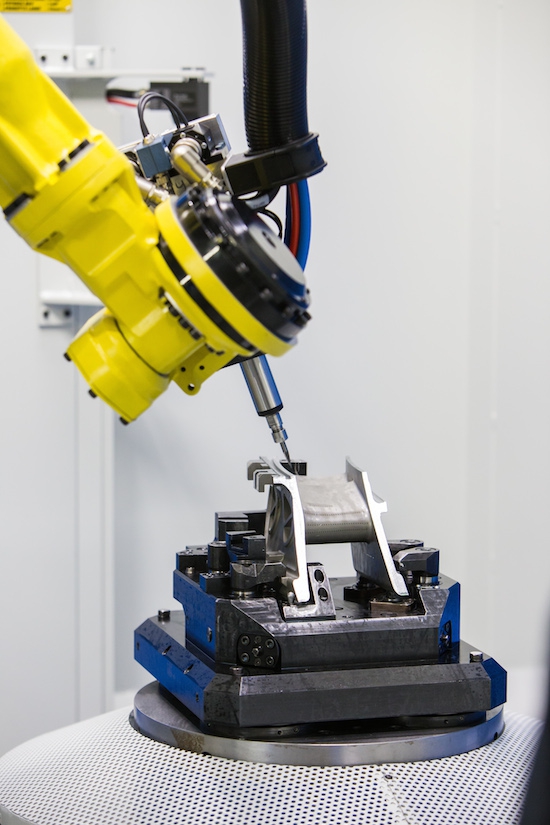 These new advanced manufacturing lines establishes the site as a “centre of excellence for the oil and gas industry,” says the company.

The official unveiling of the upgraded turbine and compressor components manufacturing facility is the result of a EUR 10 million, two years’ investment. Previous investments in 2013 increased the plant’s production capacity.

The new nozzle production line utilizes two anthropomorphic robots capable of employing 10 different technologies, including electrical discharge machining, measurement and laser beam welding. With this new line, GE Oil & Gas will be able to produce components in Talamona that it previously purchased from third-party suppliers. The site is also managed with “state-of-the-art” software with the capacity not only to schedule activities, but also to support maintenance activity that GE says is no longer preventative but predictive.

GE Oil & Gas says it is “pioneering the industry’s foray into additive manufacturing which offers increased speed and accuracy in component production.” The technology, also utilized heavily in the aviation, medical and design industries, represents the next frontier for energy manufacturing.

“The use of automated production and new techniques like additive manufacturing allow us to develop parts and products more efficiently, precisely and cost-effectively, accelerating the speed at which we can bring product to market. Our investment in these technologies at this site reflects our ongoing commitment to combine cutting edge technology and new manufacturing processes to lower cost and accelerate the innovation, speed and performance of industrial products,” says Davide Marrani, general manager manufacturing for business Turbomachinery Solutions at GE Oil & Gas. “Our commitment to ongoing research and innovation is key to meet our clients’ ever-changing needs.”

The new production lines are already working and will be fully operational by the start of 2017.

GE has been investing and growing its work in additive manufacturing across R&D sites including Bangalore (India), Niskayuna (Japan), Michigan (United States), Shanghai (China) and Munich (Germany). The applications for that work span the entire GE footprint, including the use of cobalt-chromium alloys for jet engines that were originally used for joint replacements and dental implants. Talamona coming online brings “years of automation and 3D printing development and investment to fruition,” says GE.

GE Oil & Gas opened an additive lab in Florence, Italy in 2013 with the installation of what it says is the first Direct Metal Laser Melting (DMLM) machine. Since then, the lab has grown its capabilities thanks to the addition of two further machines for the development of Turbomachinery components and special alloys. Collaborations with GE Aviation and GE Global Research Centre have “significantly accelerated” the development of the technology within GE, it notes.

“The opportunities for the application of additive manufacturing and 3D printing in the oil and gas industry are only just starting to be explored, and it will require an ongoing rethink of component design and production approach,” says Massimiliano Cecconi, GE Oil & Gas materials & manufacturing technologies executive. “GE Oil & Gas is fostering the development of this technology to produce complex components for gas turbines, while cutting costs, boosting performance and reducing emissions.”

— With files from GE Oil & Gas