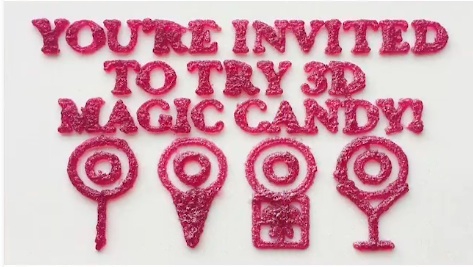 Jun. 6, 2016 – Dylan’s Candy Bar has teamed up with Magic Candy Factory to produce 3D printed candy in their stores.

Billed as the first 3D printer for candy, it made its debut last month in New York.

The 3D gummy printer allows customers to choose from over 100 different designs and gives them the ability to write words, upload images like photographs and create different shapes, “on demand in any colour and flavour,” said the candy bar on its Facebook page.

“With the product you’re able to create any customized candy that you can imagine,” added Melissa Snover, founder of Magic Candy Factory, to The Associated Press. “We were really surprised when we found out that over 70 per cent of people make their name.”

The candy is made of pectin, which is apple-based.

Since its launch in New York, the 3D candies have been introduced at Dylan’s Chicago, Los Angeles, and Miami locations.

— With files from The Associated Press