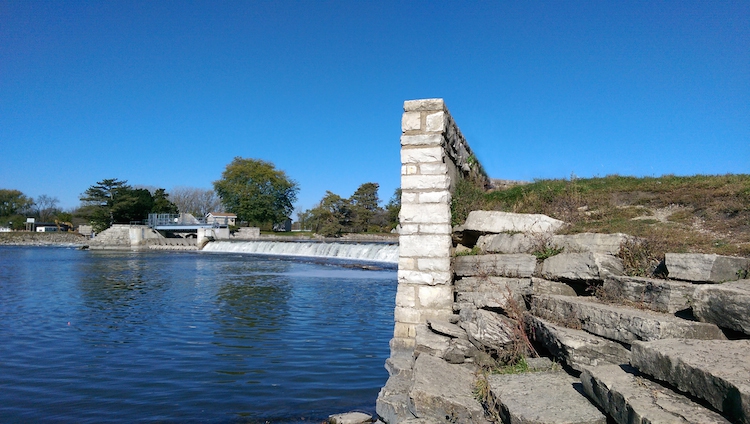 Sept. 27, 2016 – Symetrix describes its Radius DSPs as “powerful, easy-to-program control of A/V systems.” So when Sound, Production & Lighting (SPL) of Skokie, Ill., initially installed a Symetrix Radius DSP for the Fox River’s McHenry Dam, the DSP controlled an audio paging system, as you might expect. But as the project progressed, SPL owner Matt Gajowniczek was inspired to try something different.

Built in 1907, the McHenry Dam is the only dam on the Fox River that has locks to bring the water level up to lake level and then return it to river level so that river traffic can continue its journey. When a boat approaches the lock, its crew has to page the control room to raise or lower the water level and let the boat pass. That requires a paging system with speakers and mics in three locations. But there was more to it than that.

“Two of the locations are outdoors and a couple hundred feet from the one in the control room,” recalled Gajowniczek. “They wanted each paging station to independently talk to each other, which they couldn’t do with a simple audio mixer. Also, they wanted to be able to broadcast a horn sound through the system to warn boats if they’re going too fast and the like. By using a Symetrix Radius DSP with Dante, we could set up the paging horns and amplifiers, connect the locations with Ethernet, and manage it all from the control room. It’s a pretty typical application for the Radius DSP.”

But that wasn’t the end of the project. Gajowniczek continued, “The locks have sensors, and if something is in the water on either side, the control room or the vessel’s crew need to be able to press a button to gain access to the lock from either end.”

To manage that access, an engineering firm proposed an industrial computer processor commonly used in manufacturing machines and robotics. “There’s nothing of this sort designed for the lock and dam market because it’s a very small market,” Gajowniczek explained, “so they use technology from other industries.”

There were serious drawbacks to that plan, though. For one, the proposed industrial control processor is very expensive — in the vicinity of $50,000. For another, the facility is owned and run by the Illinois Department of Natural Resources, whose budget is controlled by the state legislature. When the Illinois legislature failed to pass a state budget, the project was put on hold. The dam was part of a major conservation project but management nevertheless had to find significant savings to complete the project.

That’s when Gajowniczek came up with a creative solution — use the existing Radius DSPs to control the locks.

“You just need to take an input command and output something else when someone is authorized to access the lock,” he said. “We already had a powerful DSP with the I/O capabilities we need. The sensors and switches were already in the infrastructure. So we just substituted an entirely capable device we already had for a device we couldn’t afford. We bought two more I/O boxes so we could have one at each remote station and tie them together. All the system control stuff ran on 24V, and the I/O used 5V, so we used small solid-state relays to transcode the 5V to 24V, and we were ready to go.”

Gajowniczek created a software simulation of the system to prove it would work, and the client was convinced.

“With the Symetrix Radius, they were able to complete the project within their budget,” he noted. “It has been up and running for a year now, and I have not received even one call with questions or problems. They’re very happy, and everything works fine.”

Related
No interruptions here: The power of keeping manufacturing productive
What do your motors really do?
Boosting automation productivity enables top-functioning employees and processes
A new era in camera control