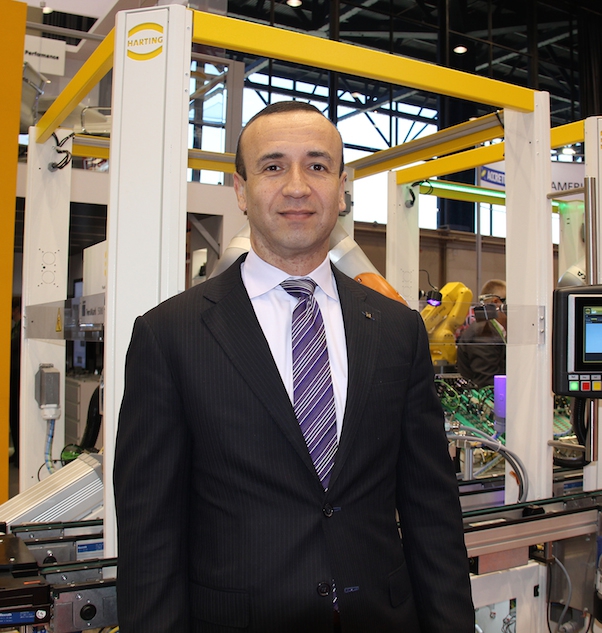 Nov. 4, 2016 – Manufacturing AUTOMATION caught up with Jon DeSouza, president and CEO of Harting North America, at IMTS 2016 to learn about the growth opportunities he forecasts for the connectivity company.

MA: How has the Canadian market been for Harting North America? How do you plan on developing the success you’ve experienced so far?
JD: We’ll have a record-breaking month and year for Canada — to the extent that next year, we are projecting high double-digit growth, well over 20 per cent. We took a very conservative approach by focusing and building on 12 or so cornerstone accounts. Those will be our partners moving forward. By having that focus on those accounts, it really allowed us to become a partner with them throughout the projects as they grew. It’s been a partnership and that led to multimillion-dollar projects across the board. We didn’t [have] 12 partners in one particular industry, we actually went across the spectrum of our key vertical markets — such as broadcast, machinery, injection molding, transportation, energy — and that led us to a pretty good farm system. As a result of this growth, we now have dedicated resources specifically for Canada, we have field application engineers, inside sales, and customer service all focused on the Canadian market, in addition to the resources we already had in the country. All of that combined — having the resources and the right focus — led us to go from nothing, [essentially] zero dollars in 2012 to close to $10 million in revenue within the next two years. If you think about going from zero to $10 million in five to six years, that’s a pretty significant number. As we go through the next chapter of our Canadian approach, we are going to invest and have additional resources; we’re looking to add another resource out west next year and focus on the next tier of accounts and opportunities.

MA: Speaking of western Canada, what are your thoughts on the future of our oil and gas sector?
JD: I think it’ll come back and the time to invest is now, because things are slow and they have time to look at alternative technologies, they being engineers. We have one product — our explosion-proof connector line — and we’ve gotten all the UL and cUL certifications to make it acceptable in the industry. When it comes back, not if, when it comes back, it’ll be crazy. It’s tough when you are deeply involved in a market and it takes a dive as it has, it’s hard to overcome that but we don’t have much to lose. It’s a virgin market for us, now we’re not going to invest tons of resources and dollars into it but we’re doing something about it, that’s for sure.

There’s [room to grow] in terms of energy, power generation and alternative energy. If you look at energy infrastructure in general, whether it’s in Canada or the U.S., it’s truly outdated and something has to happen. As you look at smart devices and the amount of data and power it’s generating… you have to do something about it.

MA: This past July, you opened Harting Mexico which consists of a new sales office and manufacturing facility. Why did you decide on Mexico?
JD: The reason we decided to go that route is because Mexico, I believe, presents the most significant amount of opportunity out of the three countries in North America. [The country] is in the process of trying to decentralize Mexico City and as it continues to expand, it will bring many projects — infrastructure, energy, transportation and [the need] to invest in capital equipment. All markets connected to cabling are used and that’s the reason why we specifically went to Mexico. We believe Mexico will become a key player in the Harting technology boom. Just like what happened in Canada, I think the same growth — if not higher — will take place here. So many companies are moving there and the government has really opened its doors. Mexico now has [more than] 45 free trade agreements and China, by comparison, has about 18 or 19. We feel that as a country, it has truly opened up its doors, not only from a trade standpoint. There are a number of engineering schools right by our plant in fact, and every year, they are graduating hundreds and hundreds of students so it’s guaranteeing good employment — good skilled, technical labour.

Couldn’t make it to IMTS 2016? Check out our photo gallery here!

This profile was originally published in the October 2016 issue of Manufacturing AUTOMATION.