COVID-19 UPDATES: Legal impacts of the pandemic in manufacturing - June 3, 2021 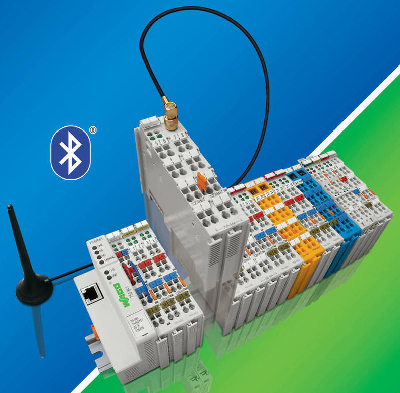 WAGO Corp.‘s 750-644 Bluetooth RF-Transceiver module provides fast, bidirectional, wireless communication between I/O nodes. Within 10ms, the 750-644 exchanges data up to 1,000 m (line-of-sight) or 100 m (within buildings), providing control engineers with a cost-effective wireless solution. This makes the 750-644 ideal for a wide range of applications from robot controls and high bay warehouses to both renewable and traditional energy applications, such as oil fields.

One 750-644 master can communicate with up to seven slaves on a Personal Area Network (PAN), also known as a piconet, via Bluetooth 2.0+EDR radio technology. Slave-to-slave data transmission is possible indirectly through the master. The 750-644 Bluetooth module offers robust communications with frequency hopping procedures and adaptive transmitting power technologies, which allows the piconet to co-exist with other radio technologies found in industrial applications. Additionally, the data exchange can be encrypted, maximizing security.

The 750-644 is the newest addition to the fieldbus-independent WAGO-I/O-SYSTEM that supports prevalent fieldbus technologies including: ETHERNET I/P, Modbus TCP/IP, PROFIBUS, DeviceNet and CANopen. With the integration of Bluetooth networks into the WAGO-I/O-SYSTEM, users can incorporate the new module with all standard fieldbus couplers/controllers found in the WAGO-I/O-SYSTEM, which consists of 300+ analog, digital and specialty modules.