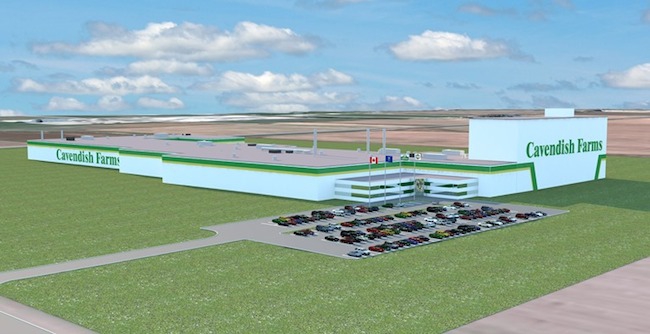 Dec. 20, 2016 – Cavendish Farms has expanded its business in Lethbridge, Alta., with the construction of a new frozen potato processing plant.

Construction is expected to begin in spring 2017 and be completed by summer 2019. According to the company, the new $350-million plant will allow the manufacturer to more than double its annual production capacity and will help reduce its carbon footprint. It will replace the current, aging plant, it added.

“This is the largest investment in our city’s history, and we are tremendously excited to be part of this growth. The positive economic impact of today’s announcement and the investment Cavendish Farms is making in our community are something we are very proud of,” noted Lethbridge mayor Chris Spearman.

Cavendish Farms is a family-owned company that produces frozen potato and appetizer products for the North American and international food industry. It operates four potato processing plants — two on Prince Edward Island, one in Alberta, and one in North Dakota — as well as a fifth plant specializing in appetizer products in Ontario.