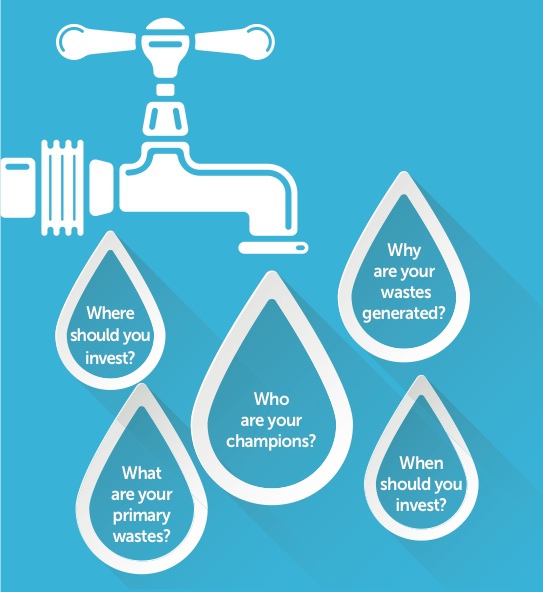 Feb. 13, 2016 – If you’re interested in saving costs through reducing your water usage, just ask Dextran Products how to do it. In late 2015 and early 2016, this Scarborough, Ont.-based manufacturer of organic chemical products began retrofitting various aspects of the company’s process water and wastewater systems with the goal of substantially reducing its water footprint — and saving big money.

First, a bit about Dextran Products. The firm is a global exporter, offering a wide array of dextran-based items to markets in Europe, the United States, the Pacific Rim and beyond. Dextran (a complex molecule of glucose chains) and its derivatives can be used in food products to prevent crystallization, improve moisture retention, and maintain flavour and appearance. Dextran is also used in pharmaceuticals, cosmetics, biological and biochemical research applications and in other arenas. For example, in veterinary medicine, the company’s 5-per-cent and 10-per-cent ‘Iron Dextran’ complex is used to prevent and treat anemia in very young pigs.

The idea of saving water at Dextran Products was not new. Company leadership had been investigating how to accomplish this for more than a decade, but had struggled with exactly how to get things off the ground. The turning point came in 2015, when George Usher, Dextran Products technical director, attended a Partners in Project Green seminar where he says he “gained a great deal of insight on how to start.”

Partners in Project Green works to create the biggest eco-business zone in the world, focusing on energy, waste management and wastewater improvements. It is a collaboration between businesses, government bodies, institutions and utilities, initiated by the Greater Toronto Airports Authority (GTAA) and Toronto and Region Conservation Authority (TRCA). Dextran Products got on board and meetings with consultants were arranged.

The primary goal of the project was to slash water use and reap those cost savings, but Dextran Products also wanted to boost its compliance with municipal programs and promote itself as a greener, more socially-responsible company. It decided to work with Enviro-Stewards, a consulting firm based in Elmira, Ont., which specializes in water and waste reduction, reuse and recycling.

The project to identify savings started in November 2015 and was completed in April 2016, the first project to be completed under Partners in Project Green’s Innovative Water Technologies program. The capital expenses were initially projected at about $80,000, with initial estimated annual water savings coming in at about 21,500m3 and cost savings at almost $53,000. The project plan was comprehensive, encompassing strategic market research, input from the vendor community, alignment with regulations and municipal programs, and more.

Enviro-Stewards has a standard five-question approach that it uses to pinpoint the best opportunities for firms such as Dextran. “In general, very few folks use a systematic multi-faceted approach to identify savings,” explains Bruce Taylor, Enviro-Stewards president. “For example, another consultant recommended that Dextran switch from an air-cooled air compressor to a water-cooled air compressor. Yes, this would save a small amount of electricity.

However, it would shift costs towards water consumption. Enviro-Stewards uses a multifaceted prevention-based approach that incorporates water, energy, and ingredient conservation/pollution prevention.” Enviro-Stewards also offered Dextran Products a shared savings-based payment model, wherein its compensation is based on implemented cost savings — so the more savings that are realized, the more both firms benefit.

The five-question approach
Who are your champions?
“What we are really selling [when we begin bringing a project to realization] is change from the status quo,” Taylor explains. “To facilitate change, we engage key facility staff throughout the process so that they ‘buy in’ to the recommendations before the report is even written. A study of 26 small and medium-sized facilities that we completed under an onsite technical assistance program found that 90 per cent of the facilities intended to implement all or most of our recommendations.”

What are your primary wastes?
Enviro-Stewards uses a series of clamp-on data loggers to measure flow, amps, temperature and more. This quantifies key processes and procedures that consume various inputs such as water and electricity, and also generate waste. This data is used to quantify projected savings of recommended conservation measures, says Taylor, and it also serves as a baseline to measure new data against once the conservation measures are implemented.

Where should you invest?
“The aforementioned in-plant data logging allows us to identify and quantify the key processes and procedures that consume the majority of a facility’s utilities,” Taylor says. “This in turn allows time and financial investment to be directed towards opportunities that provide the greatest economic and environmental returns.”

Why are your wastes generated?
On the waste end, root cause analysis is to determine the root problem that facilities are trying to address through the use of a particular resource and then to identify practical opportunities to address those issues with less resources. “For example, Southbrook Winery is an organic, biodynamic winery in a LEED Gold building,” Taylor notes. “A previous assessment found that reducing electricity consumption by a further 5 per cent would have a 20-year ROI. However, a multifaceted assessment found the winery could further reduce electricity consumption by 33 per cent with an payback of under one year.”

When should you invest?
After vetting each of the conservation measures with key facility staff, Enviro-Stewards creates a business case for each of the options that remain. This financial information is then used by the facility to plan when each measure will be implemented, says Taylor. In Dextran’s case, projected paybacks for recommended measures ranged from 0.1 years to 1.4 years, with an average of 0.3 years.

Through the five-question approach, eight water-saving measures were identified for the project, all of which were “relatively easy to implement,” says Taylor. He notes the main challenge of a project like this typically comes beforehand, in “the assessment work needed to identify what the eight most practical and economically-viable conservation measures [are in the first place].”

The course of action
The water-saving measures implemented at Dextran are:

After closer analysis, the estimated total annual water savings of about 21,500m3 and cost savings of about $53,000 were revised to 45,450m3 and $115,800 — more than double. “We were astonished as we investigated and learned of the payback as a result of work by Enviro-Stewards,” says Usher, noting that ROI will possibly be achieved in “a matter of months.”

On the subject of challenges, Alicia Wind, Enviro-Stewards’ resource conservation specialist, says Dextran was a bit short on staff-power to implement the opportunities. “They were able to hire a co-op student to help with implementation and we’ve followed up with and supported them throughout the process to keep momentum going,” she says. “If I can speak on Dextran’s behalf, I would also say that the biggest lesson learned was the fact that a surprising volume of water was going to processes/procedures unnecessarily and that a few simple changes could save so much water.”

In terms of best advice for companies contemplating the process, Usher advises “You cannot do it alone. You need to connect with people who have the expertise. I think this applies to SMEs more than anyone else because they probably don’t have the infrastructure or people who can focus on such projects to ensure they are carried through to completion.” He says he would “most certainly” recommend other companies participate in a similar initiative. “You have nothing to lose and everything to gain,” he says. “Even if your payback is a year or two, we have to remember the cost of water will only go up and so as you undertake these projects, your ROI will increase.”

This article was originally published in the January/February 2017 issue of Manufacturing AUTOMATION.