In the manufacturing business, maintaining strict control over operations is critical. For Nemak, it has made them a global leader.

Created as a joint venture between Alfa and the Ford Motor Co., Nemak specializes in the production of aluminum cylinder heads and aluminum engine blocks for internal combustion engines. As part of its manufacturing process, the Windsor, Ont.-based company relies on three thermal sand reclamation (TSR) ovens to remove and reclaim expensive Zircon sand from the core castings it manufactures for customers. But every time the ovens are turned off, so are Nemak’s profits.

TSSA’s safety concerns centred around the Burner Management System (BMS) Nemak was using to maintain an oven temperature of 500 C. The system did not allow for individual control of the 80 burners inside each TSR oven. If the flame on a burner went out, gas would continue to spew uncontrolled until an operator noticed the problem and maintenance personnel re-ignited the burner.

Nemak worked with TSSA to investigate ways to upgrade the existing BMS setup on its ovens. Each oven is configured with 22 zones broken down into seven gas trains. Each gas train supplies two to four zones. For each gas train, there is one control panel.

The hard-wired maze of wires and multiple control panels made TSR oven maintenance an efficiency nightmare. A single burner going out meant an entire zone had to be shut down until the burner could be identified and relit. Not only was the system difficult to manage, it was not cost efficient.

Transitioning from the old system to the new system would require a plant shutdown. That meant the window of opportunity was three weeks.

For Nemak, it was a daunting challenge.

“We knew we could not keep our existing PLC I/O architecture and meet the deadline,” recalls Rod Bustamante, Nemak’s project lead. “We looked at the amount of I/O our current processor had available and realized that to pull the number of wires that we’d need would be very costly. And we didn’t have the real estate or I/O capacity in our Siemens S5 PLC to do it.

“We were in a dilemma,” Bustamante admits.

“We have been integrating safety into our main SIMATIC S7 line of PLCs for 25 years,” says Ondrej Benjik, Siemens Canada’s safety program manager. “We developed our first safety PLC in 1980 and for the past four years, Siemens programmable safety systems have been applied by end-users in Canada.”

That’s all Nemak needed to hear.

To Bustamante, the idea of controlling process and safety together made a lot of sense.

“In order to turn on the gas train, I need certain safety requirement conditions. And then once I have it on, I need to maintain my process variables. So having one PLC handle my safety and my process was very appealing,” Bustamante says. 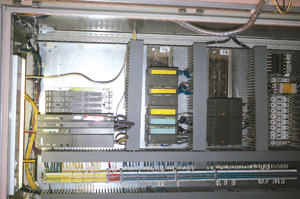 It also meant he could eliminate thousands of feet of wiring, streamline his BMS system, conform to the codes and have all kinds of I/O real estate at his fingertips for future expansion. But first, Nemak had to get TSSA to buy in. After all, the standards were written for hard-wired safety systems, which were the norm for a number of years. Safety PLCs were relatively new and had never been considered for a BMS application in the automotive industry. 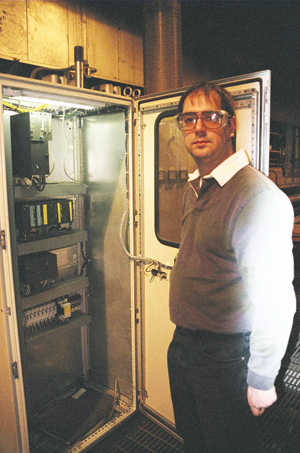 
Increased efficiency and productivity
At first, implementation presented a few challenges as the company tried to overcome the learning curve of the new technology, but it wasn’t long before the BMS switchover to the first TSR oven was complete.

“Now we only have one main panel that houses the PLC. All the I/Os are located in that one box. The wiring from the main panel to the seven remote panels spaced evenly along the length of each TSR oven only involves power and a Profibus connection,” Bustamante says.

“In the old scheme, we had hundreds of wires going to each. Now that we’re in the process of
decommissioning the old panels, we are removing over a thousand wires in the field from our cable trays. Now we can isolate faults to a gas train, which makes troubleshooting much easier.”

The simplified infrastructure is also setting a smooth transition for the second and third ovens. Nemak engineers can do much of the pre-wiring for the additional two furnaces in parallel to the old system, which means the impact of productivity when they change over to the Siemens Safety PLC solution will be
minimal.

Since installing the solution, Nemak’s safety record reflects the effectiveness of the new system: zero incidents. As for some of the additional benefits the new BMS configuration offers, the true impact won’t be known until all three TSRs are outfitted with the safety PLC – a process that is still in progress.

However, Nemak is excited about some of the early indicators: The simplicity factor – having safety and process controlled by one unit – has made maintenance much easier; unscheduled downtime and unexpected outages have been minimized because the new BMS system allows operators to be more proactive in managing the system; and it’s also made troubleshooting easier by eliminating the need for operators to conduct regular checks of the panels on each TSR oven to see if any indicator lights are flashing.

Today, from a centralized control room, the TSR operator can simply look on a single screen using a PC-based HMI running WinCC to display a graphical overview of the burner system where individual burner status, zone temperature and status of each gas train and safety components are displayed.

The result is a much quicker response to identify burners that have gone out, which means maintenance can respond quicker and have the system operating at 100 per cent efficiency faster, maximizing productivity and quality.

In addition to making Nemak’s manufacturing operation safer and more cost effective, the safety PLC has allowed Nemak to build an infrastructure that can be easily modified to meet future needs.