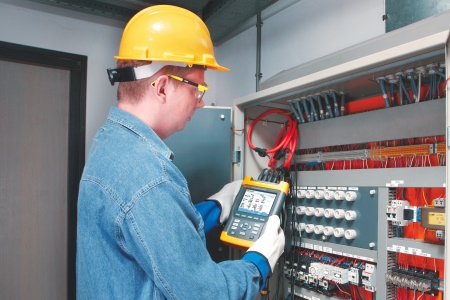 Downtime due to problems with the quality of electric power can be costly. With rising levels of automation and computerization in manufacturing facilities, voltage sag lasting just a few milliseconds can bring an automated factory floor to a halt. Power disturbances are bound to occur, and while some may only briefly interfere with sensitive equipment, others could result in the total loss of power for days.

Most international standards define power quality as the physical characteristics of the electrical supply provided under normal operating conditions that do not disrupt or disturb the customer’s processes. (The quality of power supply implies voltage quality and supply reliability.) Therefore, a power quality problem exists if any voltage, current or frequency deviation results in a failure or in a bad operation of equipment. Voltage quality problems relate any failure due to deviations of the line voltage from its normal characteristics, and the supply reliability is characterized by its adequacy (ability to supply the load), security (ability to withstand sudden disturbances) and availability (focusing especially on long interruptions).

When power is generated, it has very predictable characteristics. It energizes all electrical equipment equally and satisfactorily. However, as the power travels through the wires and energizes the equipment, the various pieces of equipment can change its quality, making it less suitable for the next application. These changes are especially common in large industrial complexes and include increases and decreases in voltage, momentary power outages and noise on the electrical system; at its most extreme, poor power quality can even cause equipment to malfunction. This can cause business problems such as lost productivity, idle people and equipment and lost data. 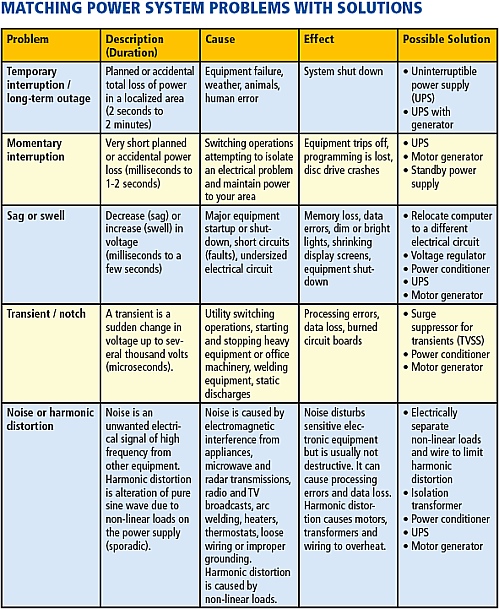 One way of reducing damage would be to connect sensitive electronic devices to circuits other than the ones large motor-driven appliances are on, try to lighten the load on the affected circuit. If a sag lasts longer, it is classified as undervoltage and is usually caused by circuit overloads, poor voltage regulation and intentional reduction by the utility. The impacts of undervoltages include equipment shutdowns, and the overheating of motors.

Voltage swells
A voltage swell, or “overvoltage,” is a momentary increase in voltage outside the normal tolerance. Voltage swells are caused by sudden decreases or the turning off of heavy loads and can damage equipment by breaking down insulation. If voltage swells last longer, they are classified as overvoltage, frequently caused by poor voltage regulation. For instance, shunt capacitors designed to improve upon the voltage profile might supply excessive reactive power and cause overvoltages. Periodic loads, such as pumps, cause periodic increases and decreases of amplitude (sags and swells); this is referred to as voltage modulation.

Outages
Outages, or blackouts, simply occur when power completely drops off line for anywhere between brief moments to several hours. Power outages can be caused by many circumstances, such as storms, which can be accompanied by heavy wind, ice, precipitation and lightning.

Momentary outages, which are seen as a dimming or flickering of lights or even a brief loss of power, are caused by short circuits. Short circuits happen when something, such as a tree limb, comes into contact with power lines or when the lines touch each other. When a short circuit occurs, a breaker automatically de-energizes the circuit and interrupts the flow of power. Electrical equipment is designed to quickly open and close the breaker two or three times automatically attempting to clear the problem. An uninterruptible power supply or generator could help mitigate the drop in power in both instances.

Harmonics
For most of the 20th century, the predominant use of electricity for business and industry was to power motors, lights and heating devices. These uses have little effect on the 60 Hz (cycles per second) sine waveform of the electricity delivered to them from their utility. They are referred to as linear loads, because the current rises and falls in proportion to the voltage wave.  A few industries, such as steel mills and aluminum smelters, used electricity to power arc furnaces, which distorted the sine waveform because the current flow was not proportional to the voltage. These loads are referred to as non-linear loads.

Non-linear loads cause waveforms that are multiples of the normal 60 Hertz sine wave to be superimposed on the base waveform. These multiples are called harmonics. In the last 20 years, there has been an explosion of microprocessor-based equipment, which are also non-linear loads. Equipment widely used in offices and manufacturing not only creates harmonic issues but are also susceptible to harmonic disorders. These include are computers, monitors, adjustable-speed drives, welding equipment, transformers, etc. The list goes on and on. The invention of all these sophisticated electronic gadgets and circuitry has increased the problems associated with harmonics immensely.

Transients
Transients can be defined as sudden, brief increases in current or voltage in a circuit that can damage sensitive components and instruments. These disturbances are shorter than sags or swells, and are caused by sudden changes in the power system. Two main categories of transients based on their duration are switching surge and impulse spike.

Switching surges are caused as a result of resonating circuits with switching devices. Large capacitor bank switching can cause resonant oscillations, leading to surges causing tripping or even damaging protective devices. Electronically controlled industrial motors are particularly susceptible to these transients.

Impulses are very short spikes, in the order of a few microseconds. They are mainly caused by lightning strikes, arcing and insulation breakdowns. Most power systems are protected from surges and spikes using a transient voltage surge suppressors (TVSS) device and by surge dividers and arc-gaps at high voltages and avalanche diodes at low voltages. If these disturbances are encountered by monitoring systems, depending on the magnitude of the spike, it may saturate or damage the monitoring sensors.

Furthermore, TVSS systems are an effective first step toward power quality management. They’re generally specified to protect the incoming AC power at the service entrance, the branch panels and individual sensitive loads. Additionally, signal and control circuit conductors are also protected to eliminate any activity from coming in the “back door.” It should be considered mandatory where there are safety-to-live and public safety considerations involved. Applications include water and wastewater treatment plants, manufacturing systems, industrial robots, power system controllers, and controllers in food-processing and petrochemical plants.

Power-quality monitoring is extremely important: it provides a continuous health check of a facility’s power system to see, diagnose and avert looming problems.

Harshad Singh is a technical sales specialist with Gescan Ontario in Milton, a division of Sonepar Canada.