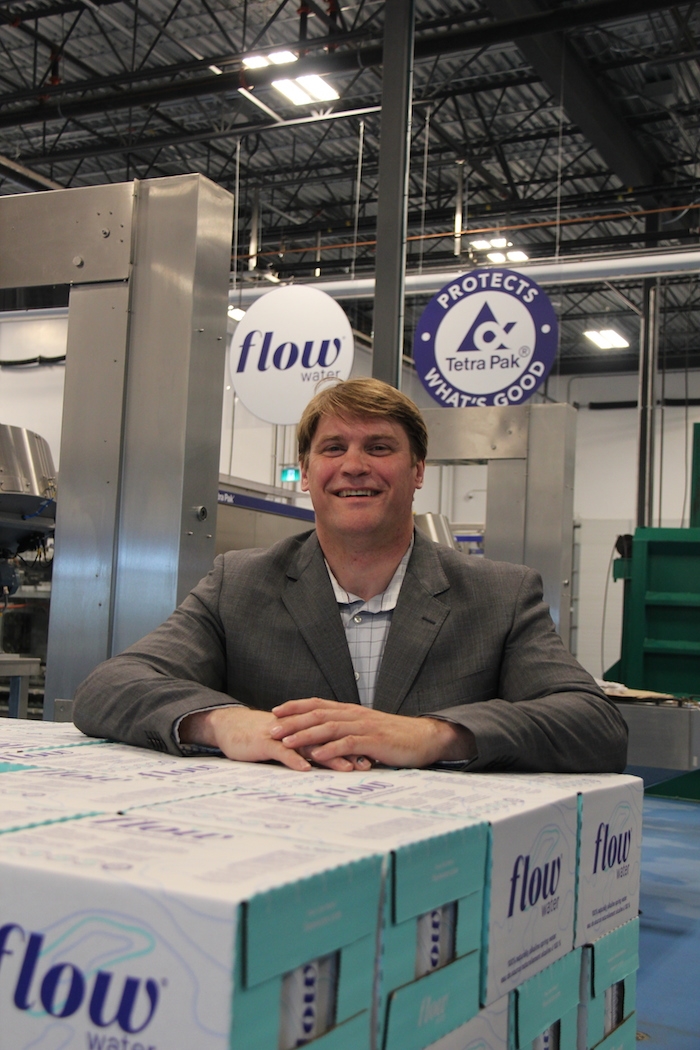 MA: Tell me about the production operation here. How much of it is automated?
MB: The majority of the plant uses automation, all stages of the process — filling, capping, and moving of the product — with the exception of palletizing. The line operates with only four people.

The water goes from the one micron absolute filter (the pre-filter), into the 0.2 micron absolute filter. This filter is so small, it’s actually the same filter they use to wash the water to clean microchips, and because the [filter] is very, very tiny, it doesn’t affect the water at all. We don’t do any industrial processing, no distillation, reverse osmosis, ozonation, chlorination or anything like that. After going through the UV light, the water moves through the stainless steel piping over to the filler.

As the rotational jaws close, they seal the top of one, the bottom of the other package and at the same time, it’s filling it from the top. You get the unfolded packages that go into the rotary, final folder and they come out the other side, folded and aseptically sealed. We put the time and date stamp on them and then they go through the conveyor system. All the machines are connected to one another. If there’s a stoppage in the system, then the machine will shut down and that’s what we don’t want — we want to keep it rolling.

At the capping station, there is a 1 litre and a 500 millilitre capper, which heats it up, glues the cap, holds it in place and carries on. Over at the cardboard packer, the machine pushes 12 packs into the box and sends it out the other side, glued and ready to be placed on pallets.

With the new plant, the new packaging and the new machine, we now have the bio-cap which is made of sugar cane. It’s a fully renewable resource so that puts us at 74 per cent renewable resources. This [makes] us a world leader in my understanding. We are very excited about this. If you look at our original packs, they have a different cap, a PE polyethylene one. Our new caps have a little leaf stamped on it and feature a larger opening, making it easier to pour out the last little bit of delicious water. We actually had suggestions from a lot of customers who were calling and emailing us — “I can’t get the last little bit” — and we are very happy to introduce the new cap with this new operation.

MA: It looks like some areas of the building are still under construction. What’s next on the to-do list?
MB: We’re right at the beginning phase. Operations are just starting this week (first week of May). We’ve done lots and lots of testing — weeks and months of it — and we’re ready. Right now we are running six- to eight-hour shifts, four days a week. In one day’s production, we can produce 43 pallets of water with one tanker — that’s a lot of sales to do. But once we get to that point, we’ll go to five days, then six days, then maybe a night shift as well.

Everything on the production side is complete, we just need to finish the rest of the office space, the locker rooms, the change rooms, and the office drywall. The lab is finished now. The thing to note is the size of the plant — we have lots of room to grow. Eventually we hope to have a machine to make the pallets for us but they run a couple million dollars each, and we’re just not at that phase yet. Baby steps, right?

MA: Why did Flow Water choose Aurora as the location of its first brand-owned production facility?
MB: The proximity to Toronto is a big factor. It’s very close to [the downtown core] and being in Aurora doesn’t take us out of the Greater Toronto Area for shipping purposes. It’s also very easy to get to the [water] source in Bruce County, Ontario. Getting a four-axle, 53-foot-long water tanker in and out of downtown Toronto was not the easiest thing to do, so it was [important] for us to try to stay out of that area.

There’s always the question of why not put it at the source, but then you’ve got to transport your pallets, your paper [for packaging], caps, empty pallets, and your finished products and get everything out the door. By choosing [this location], we’re saving a lot on shipping and fuel costs, which in turn affects our environmental footprint.

This profile was originally published in the January/February 2017 issue of Manufacturing AUTOMATION.