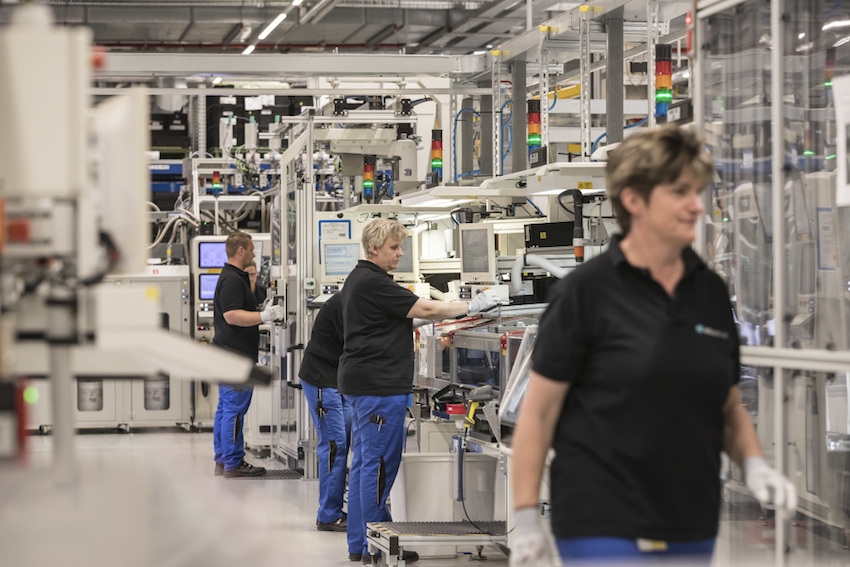 Jul. 6, 2017 – Daimler says it will build its first battery factory located outside of Germany.

A project of Beijing Benz Automotive Co. (BBAC) — the Sino-German production joint venture between Daimler and BAIC Motor — the new Beijing, China, facility will be an “important step” for the development of a global battery production network, says the automotive company.

“Building another premium eBattery factory is the next step in the implementation of our electric strategy. Thus, we have the first foreign location in our global battery production network,” said Markus Schäfer, member of the Divisional Board of Mercedes-Benz Cars, Production and Supply Chain. “The local production of batteries is crucial in order to meet the demand for electric vehicles flexibly and efficiently.”

Daimler and BAIC intend to jointly invest a total of 655 million euros (approximately C$996 million) in the production of Battery Electric Vehicles (BEVs) under the Mercedes-Benz brand and in battery localization at the site. This includes a three-digit million investment (Euro) for the battery production by the joint venture. Local production of battery-powered vehicles is scheduled to start by 2020.

“We are investing in the world’s largest market for Battery Electric Vehicles,” said Hubertus Troska, Member of the Board of Management of Daimler AG, responsible for Greater China. “By 2025, the Chinese market will have a substantial share in sales of Mercedes-Benz electric vehicles. Therefore, local production will be key to the success of our EV portfolio, and crucial to flexibly serving local demand for electric vehicles.”

“By confirming our joint commitment to the development of electric drive in China, and undertaking preparations to produce BEVs at BBAC, we are giving full play to the respective strengths of both sides. Together, we are laying the groundwork for our joint venture facility BBAC to become a future BEV production hub in China,” says Xu Heyi, Chairman of the BAIC Group.

The battery factory will be part of the global battery production network of Mercedes-Benz Cars, in which Daimler invests a total amount of around one billion euros. The network already includes the site in Kamenz, Saxony, existing since 2010, at which a second battery factory is currently built with an investment of around 500 million euros according to latest standards.

According to a company statement, the new battery production plant will combine the newest industry standards and latest production facilities with industry 4.0 technologies.

Overall, Daimler says it is investing around one billion euros in the global production of batteries, estimating that by 2025 electric vehicles will account for between 15 and 25 per cent of the total unit sales of Mercedes-Benz.