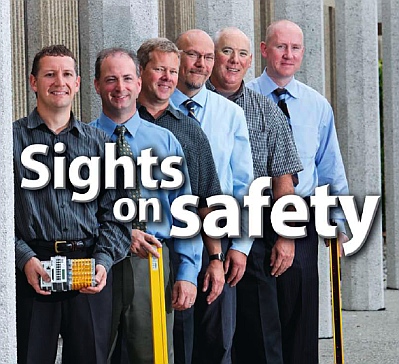 All participants of Manufacturing AUTOMATION‘s 2009 machine safety round table this fall were asked what technology or trends they saw as important in the upcoming year. The results were varied, but reducing costs and ever-increasing legal enforcement were two standouts.

Jeremy Warning, a senior associate with Toronto’s Heenan Blaikie LLP, saw increased regulation and enforcement as a key trend. While on Ontario’s Ministry of Labour website, he noticed the total amount of fines collected in recent years, with a jump from $12 million in 2007-’08 to $28 million the next year. “And I don’t think this a trend unique to Ontario,” he added.

Number of convictions and amount of fines per year in Ontario

Jim Grube, safety systems product specialist with Siemens Canada, mentioned control-reliable circuits. “Tight integration of new safety technologies, such as safety networks, safety PLCs and safe drives, allows the application to be more flexible.” At Siemens, they believe all devices will have some type of safety in the future, so they have their Totally Integrated Automation concept that includes safety PLCs, wireless safety, wireless HMIs with safety, safety rated drives and servos.

Allen Rutherford, senior applications engineer with Bosch Rexroth Canada, brought up putting cameras inside danger zones. “So leave the guard in place and look at the monitor. Your touch screen can have little webcams showing you inside the hazard zone, and you can do first-diagnosis right there without putting yourself in harm’s way at all.” As well, he mentioned how web, email and pager technology are helping keep supervisors informed when safeties are violated. And finally, he had to mention safety PLCs, which aren’t new “but have recently become more widely implemented.”

Making use of one product in many ways was on Walter Veugen’s mind with logic-based safety. “You can have light curtain protecting three different modes of operation," said the president of integrator Veugen Integrated Technologies. "A light curtain has three different functions depending on what the machine is doing.”

“Another trend that’s starting to emerge is safety being considered earlier in the design stage … before the machine’s even built,” said Omron Canada safety product manager Dominic Caranci said. “I know that’s a long way from being adopted into North American [standards and] culture, but it’s one of the things [with its] origins in Europe.”

For Beckhoff’s Calvin Wallace, “Safety PLCs and safety networks are a trend to look for because you can distribute your safety I/O throughout the machine or your line on the same Fieldbus as non-safe I/O and servo drives. This technology continues to drive the cost of safety down while significantly simplifying your control architecture.”

Caranci agreed. “The key point there is that the price of all the safety technology is drastically coming down. … And as the costs of these products are going down, we’re seeing them being used in non-safety applications, which inherently improves the reliability of whatever that application is.”