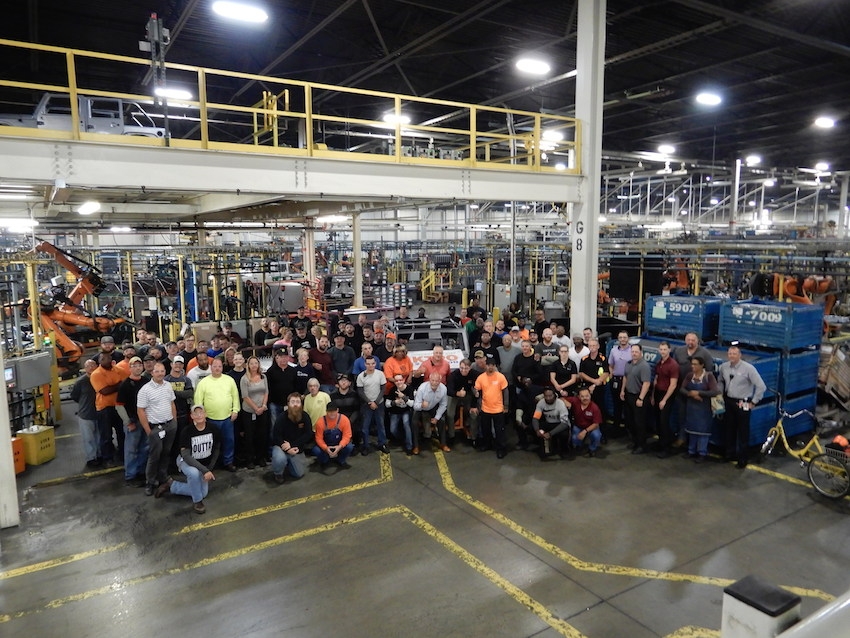 Aug. 21, 2017 – This month, Kuka Toledo Production Operations (KTPO) celebrated the completion of its two millionth Jeep Wrangler body-in-white, describing it as the latest milestone in the plant’s “stellar history.”

Since beginning operations in 2006, this wholly owned subsidiary of Kuka Systems North America has built the body-in-white of all Wranglers sold worldwide in both the two-door and four-door models. It took seven years for KTPO to build the first million, but only four to make the second million, as it expanded output to keep up with growing global demand.

With a fleet of 259 robots, KTPO produces the unpainted vehicle body — 828 per day, or one every 77 seconds, over three daily shifts — in the 330,000-square-foot body shop. Following a trip through the paint shop, the KTPO bodies are then mated to the chassis frame during final assembly at the Toledo Assembly Complex.

Assembling the body-in-white involves welding the underbody, windshield and closures together, enabling Kuka Systems to showcase its automated metal joining technologies used in automotive assembly plants worldwide. The plant’s robotic fleet and 60,000 other inputs are linked to a back-end digital monitoring system and a master data management system. This networking of production processes has evolved into an intelligent lifecycle management platform designed to Industry 4.0 principles. The fully digitized solution controls and monitors the entire value chain in real time, notes the company, from receipt of materials to the actual production processes and goods dispatch, helping to identify bottlenecks and optimize capacity utilization.

“KTPO has been a tremendous story for Kuka, a study in technical excellence and ambition, complemented by a strong commitment to the venture’s continued success by all involved, especially our Toledo staff,” said Larry A. Drake, Kuka Systems Group CEO. “It’s a platform for implementing Kuka innovation and best practices that attracts visitors from around the world to understand how this works so well on multiple levels.”