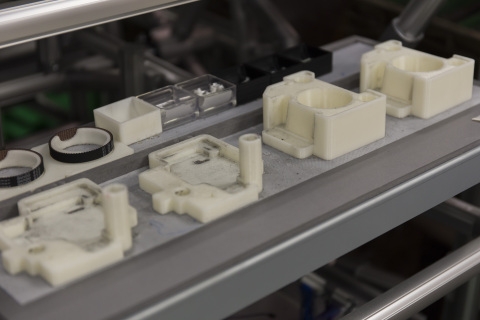 Sep. 29, 2017 – Ricoh Japan is replacing some traditional metal tooling with lightweight 3D printed jigs and fixtures for its Production Technology Center assembly line dedicated to large-format printers. The assembly line is located in the northeast branch of Ricoh Industries in Miyagi prefecture, Japan.

Ricoh is specifically assembling an electronic component using a 3D printed fixture produced in anti-static ABS plastic on the Stratasys Fortus 900mc production 3D printer. By producing the 3D tools, Ricoh is able to produce each tool according to the part geometry while reducing the tool’s weight. This has enabled Ricoh to improve its manufacturing process in which an operator typically handles more than 200 parts a day.

“Because we are producing an enormous number of parts, it takes a lot of time and effort to identify the right jigs and fixtures for each one. This manual process has become even lengthier as the number of components grows, requiring that an operator examine the shape, orientation and angle of each part before taking out a tool and placing it back in its original fixture,” said Taizo Sakaki, Senior Manager of Business Development at Ricoh Group. “The operators were occasionally annoyed with the many different tools, and we were looking for a way to accelerate tooling to match our manufacturing schedule.

“Now with Stratasys 3D printing, we are able to customize the tools according to the part and produce them on demand,” continued Sakaki, “which is helping us restructure and modernize our production process.”

Ricoh explains it will typically outsource machine cut tools that could take two weeks or more. Now, Ricoh’s operators can determine the shape and geometry of a fixture that corresponds to its associated part through 3D CAD software and 3D print it in one day.

“The Stratasys Fortus 900mc 3D printing solution enables us to realize designs that are difficult for conventional cutting methods to replicate, such as hollow interiors, curves or complex shapes. The material used to 3D print the tools is very strong and anti-static which is important due to the large number of electronic components we are assembling, adding to the advantages of Stratasys 3D printing,” explained Sakaki.

“Ricoh illustrates perfectly how manufacturing aids 3D printed with Stratasys additive technology empower manufacturers to increase their efficiency and flexibility while ultimately becoming more competitive,” said Omer Krieger, President of Stratasys Asia Pacific & Japan. “Customized 3D printed jigs and fixtures can play an important role in enabling companies to get products to market faster and are a great example of how Stratasys applies purposeful innovation to manufacturers’ goals and aspirations. Whenever you can reduce a process from weeks to days — that is a solution worth exploring.”