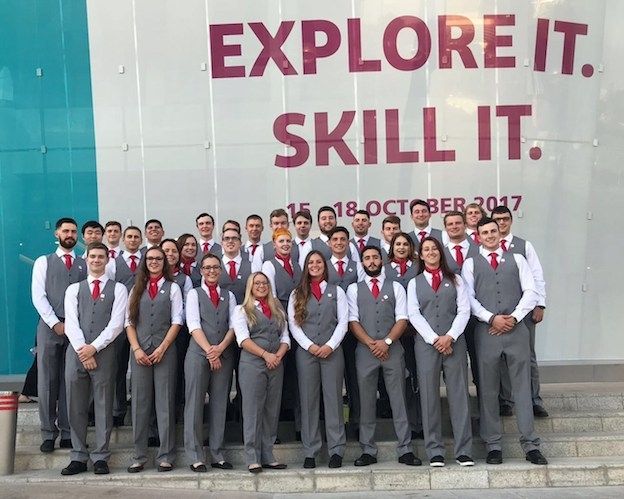 Oct. 23, 2017 – Skills/Compétences Canada, a national not-for-profit organization that promotes careers in skilled trades and technology, has announced that WorldSkills Team Canada 2017 has been presented with one medal and 13 Medallions of Excellence at WorldSkills Abu Dhabi 2017.

Canada’s Best of Nation Award was presented to Avery Bird of Toronto, Ont., and Theodor Willert of Etobicoke, Ont., for their performance in Mechatronics.

Held every two years, the WorldSkills Competition describes itself as the largest vocational, education and skills excellence event in the world. WorldSkills Abu Dhabi 2017 took place October 15 to 18, at the Abu Dhabi National Exhibition Centre, in United Arab Emirates and recorded more than 100,000 visitors. Officials say the 2017 event was the largest in the 67-year history of WorldSkills with approximately 1,300 competitors from 59 member countries and regions from around the globe.

“We are very proud of the 31 members of WorldSkills Team Canada 2017 for their outstanding performance at the 44th WorldSkills Competition,” said Shaun Thorson, CEO of Skills/Compétences Canada. “The determination, hard work and skills that these talented young individuals have demonstrated is truly remarkable. We look forward to seeing them prosper in their careers as they join Canada’s skilled trade and technology workforce.”

2017 is Canada’s 14th participation in a WorldSkills Competition.

WorldSkills Team Canada 2017 is made up of 31 young skills champions, including 22 men and nine women, ranging in age from 16-24, from across the country. The group participated in 28 out of 51 skill areas relating to the following six sectors: construction and building technology, creative arts and fashion, information and communication technology, manufacturing and engineering technology, social and personal services and transportation and logistics.

Below are the WorldSkills Team Canada 2017 results:

The next WorldSkills Competition is scheduled for August 29 to September 3, 2019, in Kazan, Russia.