COVID-19 UPDATES: Preparing for recovery: Steps for manufacturers to emerge from crisis - June 30, 2020 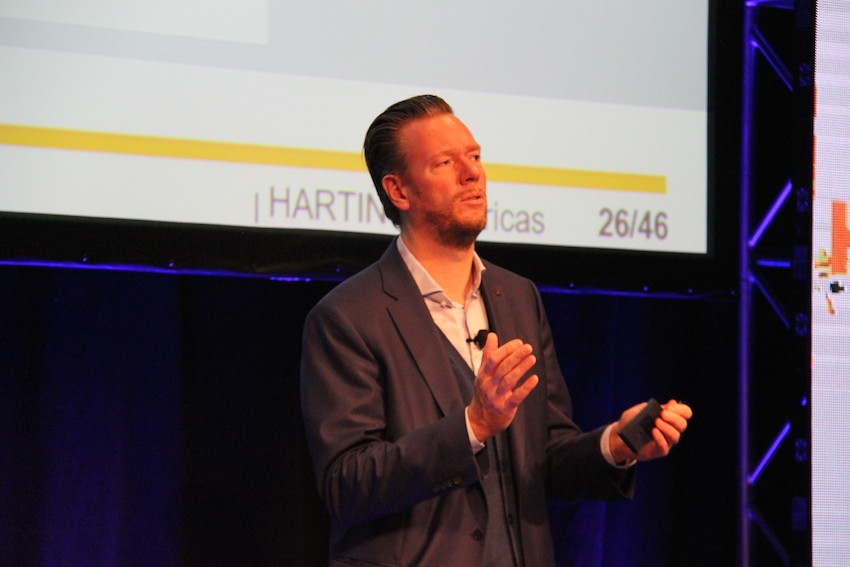 Oct. 30, 2017 – Harting held its annual media event on October 26 at North Central College in Naperville, Ill., focusing on a business update from the company and several key initiatives.

The event began with a business update from Harting Americas president and CEO Jon DeSouza who spoke about the company’s success in the Americas in the 2017 fiscal year, which ended in September. He began by stating some key figures for the company over the past year, including 20 per cent growth in North America, 22.4 per cent growth in the opportunity pipeline, 64.2 per cent new product revenue growth, and 15.5 per cent North American manufactured products overall revenue growth.

DeSouza said 2018 fiscal year initiatives aim to continue that growth: The first is to capitalize on economic recovery and growth; then to expand digital marketing initiatives. Third is to focus on South American development by enlarging the area Harting serves. Next, is the expansion of the IIoT footprint through smart connectivity and edge computing; fifth is expanding manufacturing footprint and technology development. Finally, he stated the company expects continued growth throughout all major vertical markets.

Chairman of the board Philip Harting spoke about global successes and initiatives. Over the past two years, the company has seen “substantial successes,” Harting recounted, from winning the Hermes award in 2016, to a 10 per cent global growth in the 2017 fiscal year, to the expansion of new facilities in Mexico, Romania, and India.

Next, he announced the partnership with the Robotation Academy in Foshan as one of 21 partner companies in the fields of robotics, automation and Industry 4.0. The Robotation Academy provides trainings, conferences and presentations on future technology trends. He also thanked various company partners, including MIT, Texas Instruments, the Industrial Internet Consortium, IBM Watson and Microsoft, noting that Harting’s strategy for success is through partnerships.

IIoT discussion: Edge devices and Cloud computing
Following the business update, Harting director of new technology, Dr. Vivek Dave, and IBM business development executive Peter Xu gave a talk on edge devices and Cloud computing. There are three main drivers for edge-computing, they said; the first is that sending all data from real-time devices to the Cloud is not practical. By 2020, there will be an estimated 30 to 50 billion connected devices. Without edge-computing, all data, even unnecessary data, produced by those devices would go to the Cloud resulting in a substantial need for data centre storage, they noted, saying that instead, edge devices can ensure only important information would go to the Cloud by sorting data directly on the device.

Next, some data must be processed quickly and locally. “Think about an autonomous car,” Dr. Dave said. “You don’t want to have to wait to connect to the Cloud. You need that car to be able to make decisions right there. That is why devices at the edge, or device level, are necessary.”

Third, local processing creates a ‘knowledge firewall’ and retains proprietary expertise, which is important to many companies and industries.

Then Xu took the stage. He is involved in applications for IBM customers on a global basis and discussed the balance between edge and Cloud Computing. The architecture that IBM is adopting is a combined Edge – Cloud architecture that is “very compatible” with the Harting approach.

Finally, the talk focused on the convergence of the Cloud and edge devices. Dr. Dave stated that the solution for the projected 30 to 50 billion connected devices by 2020 is utilizing an edge computing front-end to send only important data to the Cloud combined with a Cloud computing back-end to make calculations.

The Smart Han integrates active components into the connector system allowing connection to the IIoT. These new modules feature the same footprint as all other Han-Modular modules, and can be integrated into any Han-Modular system making the Han-Modular the gateway to the IIoT, describes the company.

New Han-Modular campaign
Next, the company debuted a new short film to reintroduce the Han-Modular product line to the industry. The protagonist of the 90-second movie is an engineer who is struggling with a design, and the solution is Harting’s Han-Modular series, which is illustrated as a robot that transforms as the engineer’s design changes.

The film marks the beginning of a new marketing campaign for the product that focuses on the benefits of the product line, which includes space-savings, design flexibility, IIoT compatibility, and low-maintenance for the end-user.

“Han-Modular is a very important product for the industry,” said Jenkins. “It was developed in 1996 with six modules. Now there are over 100 modules, and Han-Modular remains our fastest growing product line.”