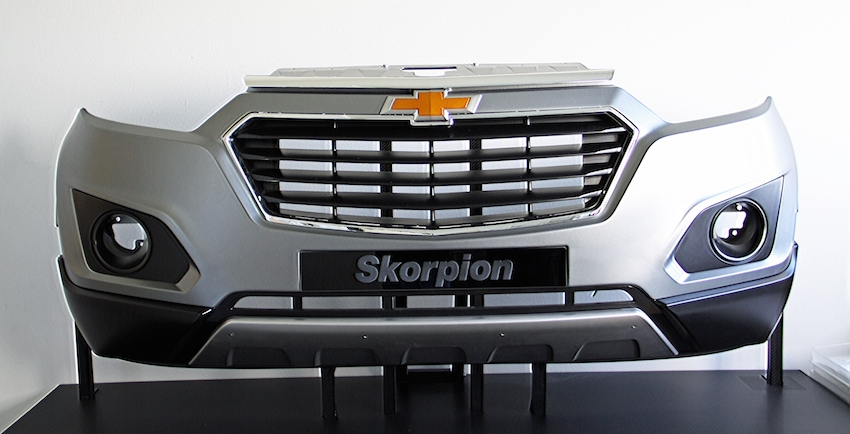 With offices in Milan and Turin, Italy, the company deploys its arsenal of six Stratasys 3D printers to fulfill a gamut of both exterior and interior automotive prototypes – from door handles to full-size seat frames. More specifically, using its FDM 3D printers, Skorpion Engineering can respond to customer requests within 24 hours while its PolyJet 3D printers are driving greater part complexity and precision compared to traditional prototypes, says the company.

According to Italo Moriggi, general manager of Skorpion Engineering, the company witnessed a surge in business as customer requirements shifted from rudimentary clay models to high-performance prototypes, with shorter deadlines. This is exemplified by a recent project which saw the company produce a full-sized car bumper. Utilizing the large build tray of its Fortus 900mc Production 3D Printer, Skorpion Engineering produced the part 50 per cent faster compared to the time it would have taken to make the bumper from clay.

“In the context of the end-to-end manufacturing workflow, the level of time-saving enjoyed with 3D printing isn’t merely improvement or progression – it’s transformational. In fact, with 3D printing we can send prototypes to our customers the very next day,” said Moriggi.

According to Moriggi, beyond the time-savings, the ability to replace heavy clay prototypes with lightweight yet robust FDM materials, is integral to providing customers with improved part aerodynamics while offering the same mechanical characteristics as the final component.

“Crucially, this ability to produce fully functional parts with improved performance allows our customers to undergo aesthetic and functionality verification significantly faster. This directly enhances their overall production cycle and helps accelerate their time-to-market,” he adds.

When it comes to customized, precise prototypes, the company calls upon its haul of PolyJet 3D printers. A recent project saw the company deploy its Objet350 Connex3 3D Printer to simultaneously combine varying textures of rigid and soft material to produce a “highly accurate” vehicle dashboard in one print.

“The ability to combine contrasting material characteristics permits us to optimize parts and indicate how our customers can save both time and capital by overcoming engineering challenges early in the design phase. In terms of the dashboard, we could deliver this to our customer 50% faster compared to traditional methods,” explained Moriggi. “As we continue to push the prototyping capabilities of our 3D printers, we are discovering the wider manufacturing potential they possess,” he adds. “In fact, our goal is to utilize additive manufacturing to realize the production of a fully functional concept car within the next five years.”

Zehavit Reisin, Vice President, Materials Business Unit, Stratasys concludes, “Skorpion Engineering is the perfect example of how a number of future-ready companies are not merely exploring the use of our complete 3D printing solutions to solve traditional prototyping challenges but are discovering the unparalleled capabilities for the manufacture of final parts. This demonstrates how Stratasys applies purposeful innovation to customers’ goals and aspirations.”