Dec. 22, 2017 – As another eventful year comes to an end, join us for a trip down memory lane as we recap the top 10 most-read stories from Manufacturing AUTOMATION, as chosen by you. Happy reading! 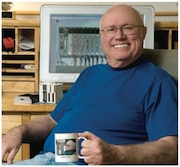 The passing of a legend: Dick Morley
Earlier this year we lost a true legend and innovator of the manufacturing industry, Dick Morley. Famously dubbed the father of the PLC, it is Morley who, in 1968, led the team to develop what is considered one of the most important inventions in manufacturing.

GE to close 125-year-old Ontario plant
More than 350 workers at a General Electric plant in Peterborough, Ont., will be losing their jobs as the 125-year-old facility ceases manufacturing next year.

Canada’s Top 10 Best Places to Work in Manufacturing 2017
Great Place to Work (GPTW) has announced the 2017 list of Best Workplaces in Manufacturing. Congratulations to all employers!

Mars Canada invests $70 million in expanded chocolate factory in Ontario
Mars Canada’s newly expanded Newmarket, Ont.-facility is expected to create up to 30 new full-time jobs. At peak capacity, the facility will employ up to 150 associates.