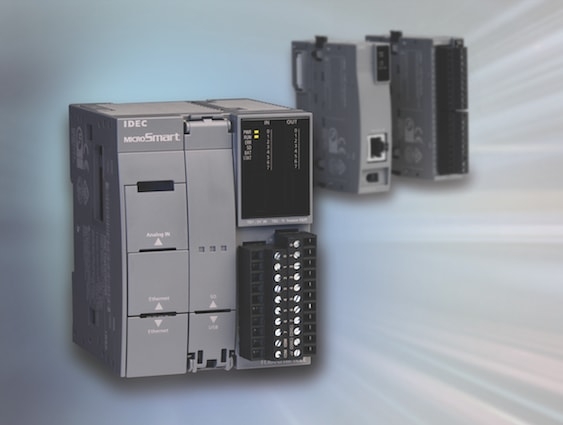 With its expanded I/O capacity, the FC6A Plus can control and monitor the largest machines or entire small-scale manufacturing facilities, says Idec, adding that basic instructions can be executed in the speed of 21 nanoseconds and program memory is 800 kB (100K steps). Two models are available, each with 24 VDC input power. The 16 I/O model has eight inputs, and eight relay or transistor outputs. The 32 I/O model has 16 inputs, and 16 transistor outputs. Each model also includes an integral 0-10 VDC analogue input with 12-bit resolution. Each model can accommodate up to three plug-in discrete, analogue, serial communication or Bluetooth cartridges. Each discrete cartridge has four discrete I/O points, either four inputs or four outputs. Each analogue cartridge has two analogue I/O points, either two inputs or two outputs. Up to 63 I/O expansion modules can be added. The FC6A Plus also includes an optional Bluetooth wireless communication adapter, giving users the power to monitor the PLC and download/upload programs from a PC or laptop with Bluetooth capability. All models have two built-in RJ45 Ethernet ports. Optional plug-in communication cartridges can be added to create two additional RS232C/RS485 ports. With the addition of serial communication modules, up to 33 RS232C/RS485 serial ports are supported.