Canadian press brake manufacturer Accurpress created its first tandem press in response to a customer’s request. The customer didn’t want to buy an expensive custom machine with the sole purpose of bending longer parts, which would rarely have operated at full capacity. 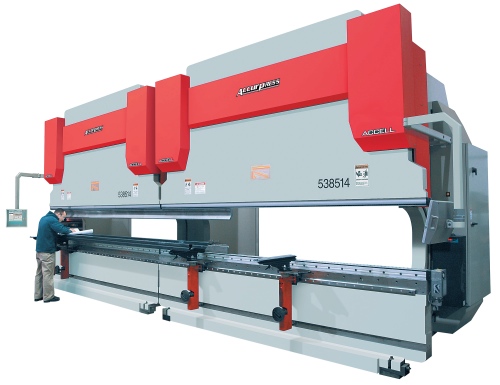 The end result was anything but an awkward monolith taking up space. The company, with a manufacturing location in Surrey, B.C., set out to develop a tandem machine by coupling two of its Accell press brakes, using the “master and slave” principle.

“It was clear to us that the coupling should be via the control system,” says Alex Kvyatkovski, R&D team leader at Accurpress, referring to the machine’s PC-based control from Beckhoff Automation. His team achieved the coupling with Beckhoff through real-time Ethernet. To switch from simplex to tandem, all the operator has to do is select tandem mode on both machines, specify which is “master” and which is “slave,” and upload the recipe to be processed to both control computers.

In tandem mode, the two machines operate as one and can bend sheet metal components with a length of up to 14 metres. Beckhoff control technology synchronizes the two machines and controls the bending process, including the associated material handling equipment. 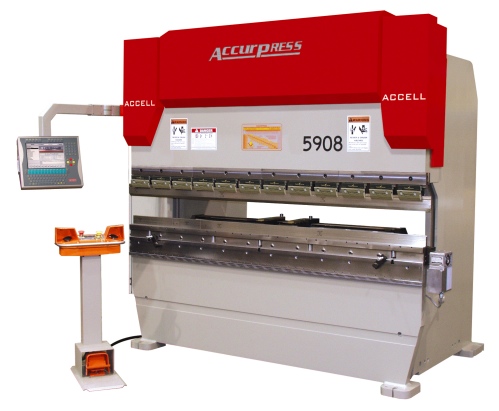 Until 2001, the Accell, Accurpress’ most advanced press brake, used a controller designed specifically for press brakes. While its performance was satisfactory, it was costly and had limited programming flexibility, which Kvyatkovski found presented “significant obstacles” to maintaining a competitive edge.

Accurpress had experimented with using computers to control machines and tried different approaches. “While some people back then unfairly thought of computers as unreliable, we nevertheless started using them in ’96,” Kvyatkovski says. “So by 2000, when we saw what Beckhoff had to offer, we jumped on board right away.”

Beckhoff’s philosophy is essentially PC-based control, and doing more control with less hardware. A single industrial PC can do the work of multiple PLCs while also controlling motion and running HMI.

For Accurpress, PC-based control was a cleaner, more cost-effective solution than using hardware PLCs, and much less expensive than the original controller. Just one centralized controller can be less costly because it has fewer proprietary components than the PLC. It also means less programming.

“Typically, you only have to program that one controller versus multiple hardware PLCs,” says Shane Novacek, Beckhoff’s marketing communications manager. “You program the IPC once and you don’t have to worry about getting that code to several other controllers, because the IPC is an all-in-one, multitasking device.” 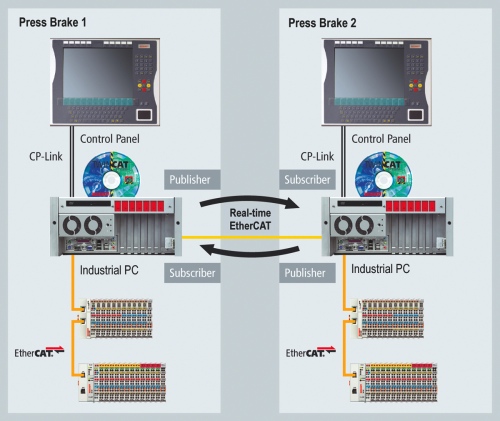 None of the benefits of PC-based control are lost when the machines are in tandem mode. Real-time Ethernet coupling gives the presses precision, repeat accuracy and process reliability. Whether in simplex or tandem mode, it operates with a bending speed of 20 mm/s and a parallelism accuracy of ±0.01 mm, made possible by closed-loop servo hydraulics technology, controlled by the IPCs.

Even in tandem mode, Accurpress machines have almost unlimited flexibility that comes from having a clean hardware architecture and open TwinCAT automation platform. Different recipes with different start on target positions allow different angles. Though 90-degree angles are the most common, the machines can handle much more complex 3D shapes.

“Some angles are 90 degrees, some obtuse, some acute,” Kvyatkovski says, “but you can also do a lot of what’s called ‘fade-away bends.’ ” He says a boat manufacturer uses Accell machines to make fade-away bends that are 120 degrees at one end and roughly 170 at the other.

Accurpress can adapt any press to customer requests without special hardware and can modify or complement functions with minimal effort. Customers enjoy a shorter-than-average lead time: only two to three months for major customization requests. He adds that such flexibility would not be possible with an off-the-shelf controller from a third-party vendor and that “several lucrative machine orders would be lost as a result.”

PC-based control brings similar benefits in assembly, packaging and converting, plastics technology, food processing, automotive and tire, alternative energy technology, semiconductor, wood, timber and other areas. Because this type of system is compatible with Windows, a user could use it in conjunction with Excel spreadsheets, e-mail or SMS alerts to maintenance crews.

And there’s no need for those proprietary hardware cards that are installed in a controller to manage data in the Fieldbus language — a simple Ethernet card will do.

“With EtherCAT you’re able to get very, very rapid communication at microsecond level speeds for passing data from device to device,” Novacek says.
For manufacturers that want to try EtherCAT but are already equipped with machines that use DeviceNet cables, a complete retrofit isn’t necessary. Master and slave gateway terminals would allow data to pass freely from an EtherCAT device to a DeviceNet-enabled machine.


Safe motion control
Tandem press brakes are a cost-effective way to bend materials of otherwise unruly proportions. “Anything big, long and metal,” says Alex Kapulnik, who is Kvyatkovski’s engineering partner at Accurpress. He has seen the machines joined in twos, threes and even fours to manufacture submarine hulls for the military as well as the long metal casings that house cables in construction projects, and agricultural equipment, such as the rotating part of a combine. Tandems, and often “tridems,” are also used for light pole or flagpole manufacturing. Poles can be octagonal or, in a process called “bumping,” multiple small bends can create a rounded look.

Accurpress recently mounted a sheet follower at the front of its Accell press brake to handle materials too heavy for an operator to lift. TwinCAT software synchronizes the motion with the press via an electronic axis, and the sheet follower safely and precisely lifts and lowers heavy materials.

Built into each press brake is safety control in the form of TwinSAFE, described as follows on the Beckhoff website: “The TwinSAFE safety PLC communicates with the industrial PC, safety inputs/outputs, safety-related drives, and safety sensors through the Safety over EtherCAT protocol.”

“In tandem mode, both machines are synchronized to run in parallel, but the same safety controls on each machine take care of safety,” Kapulnik says, “and the machines are in compliance with safety standards in Europe, Canada and the U.S.”

Kvyatkovski says customers have now come to expect the flexibility they have experienced using tandem press brakes with a PC controller. “More and more, we find that press brake users are seeking synchronized presses like ours,” he says, “while traditional PLCs and proprietary designs are quickly losing favour.”

Michelle Morra is a freelance writer based in Toronto.