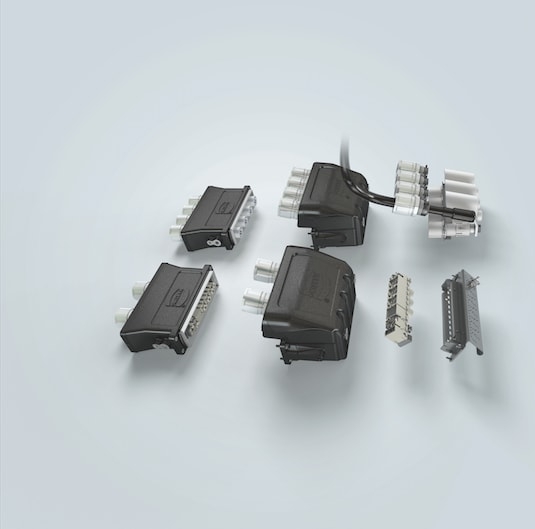 Along with the new Han HPR 22 Slim connector which can accommodate up to four 250A contacts, the company also has added new sizes 16 and 34 to the Han HPR EasyCon line that was launched originally with size 24. The two-part hood and mounting housing is ready to be screwed together in a few steps, with “ample space inside for cables for car-to-car or motor connections, making it easier on installers working right on the equipment,” says Harting.

The size 16 can house 2-4 high current contacts (up to 2 x 650 A), suitable for connecting compressors, single wheel drives, and ventilation systems. It also can be configured as a hybrid with power, signal or data modules from the Han-Modular lineup, with over 100 inserts to choose from. The size 34 comes in a straight version for traction motor connections and angled version for car-to-car jumper connections. They can accommodate up to four 650 A contacts each and as a hybrid can house up to 12 Han-Modular inserts.