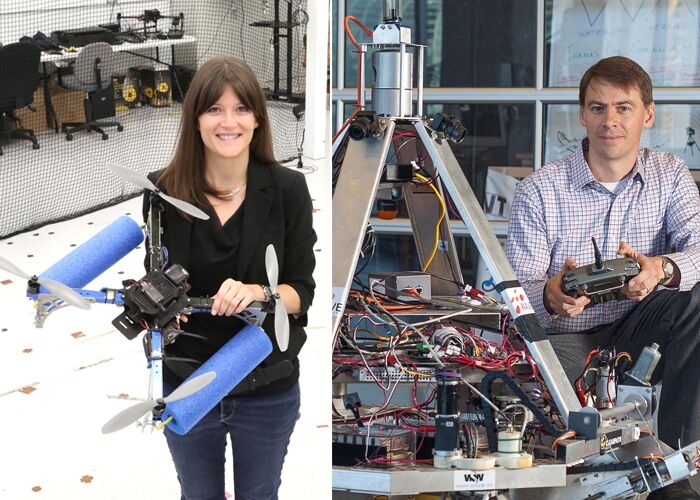 Professor Angela Schoellig (left) and Steven Waslander (both UTIAS) are at the forefront of NSERC Canadian Robotics Network that aims to advance Canada’s role as a global leader in the field.

August 24, 2018 – Professors Angela Schoellig and Steven Waslander are representing the University of Toronto Institute for Aerospace Studies (UTIAS) in the NSERC Canadian Robotics Network (NCRN), a consortium of leading robotics researchers from across Canada that includes members from universities, industry and government. The NCRN recently won $5.5 million in funding from NSERC’s Strategic Partnership Grants for Networks competition.

The two researchers sat down with Joan DaCosta, manager, director’s office at UTIAS, to outline what they aim to achieve as part of this consortium.

What does the NCRN hope to accomplish with the NSERC Strategic Partnership Grant in Robotics?

Schoellig: The NCRN brings together a fantastic, interdisciplinary team of researchers and industry partners from across Canada to develop the next generation of robots that can interact with complex and changing environments and collaborate with humans in a reliable and predictable manner. We have particularly focused on problems that are important for Canada, such as robots for the natural resources sector and robots that work in Canadian weather all year around.

How will the funding aid both Canadian research in robotics and Canadian students?

Waslander: Over 70 per cent of the network funding goes directly to supporting highly qualified personnel in the network, and will help 14 faculty members across Canada maintain active research programs. It brings in a wide range of partners who get early access to research results and the ability to interact with the strongest researchers and potential student hires in Canada in the field of robotics. The network has two main themes, interactive autonomy and resilient autonomy, which seek to dramatically alter the capabilities of today’s robots in terms of working with people and each other, and working for long periods of time across a wide range of conditions and environments, respectively.

Schoellig: Students educated through this network will be sought after in industry and academia. They will work on the most pressing problems in robotics while, at the same time, building a strong interdisciplinary network with the other students, faculty members and industry partners of NCRN.

Is the funding of the NCRN a push to help Canada continue its role as a leader in robotics?

Waslander: Yes, it is a push to exploit Canada’s dominant position as a leader in AI – in the great killer application for AI as we continue to push the boundaries of what is possible, and it is a push to keep Canada from falling behind other massive investments in robotics in the U.S., the EU and Japan, to name a few.

Schoellig: In the past, Canada has been a leader in robotics – think, for example, about the early successes of building the Canadarm! This investment is a first step towards retaining robotics talent in Canada and continuing to develop core robotics technology in Canada. Many other countries and regions, such as the U.S., Europe, U.K., China, Russia, Japan, have acknowledged the importance of robotics in the future and have made investments of hundreds of millions in this space. In Canada, we are in a unique position of becoming leaders in robotics by leveraging Canada’s leading role in AI and marrying this with engineering and robotics.

Waslander: Both Angela and I are deeply involved in the resilient autonomy theme, for which I am the theme lead, and Angela is also involved in aspects of the interactive autonomy theme through her research in reinforcement learning with multi-robot systems. We are both seeking to build more capable aerial robots that are capable of navigating safely in constrained environments, like indoors or in urban centres, and in large teams of vehicles working in coordinated manners for delivery, surveillance, remote inspection and even construction. I am also heavily involved in developing robust solutions to autonomous driving perception, including 3D object detection and semantic segmentation using uncertainty aware deep neural networks.

Schoellig: Steven and I both have a track record in developing algorithms for driving and flying robots, and demonstrating and testing them extensively on real robots operating outside. We contribute our experience in developing machine learning algorithms for real robots. Algorithms that extend the capabilities of robots operating in the real world, which is complex and unpredictable.