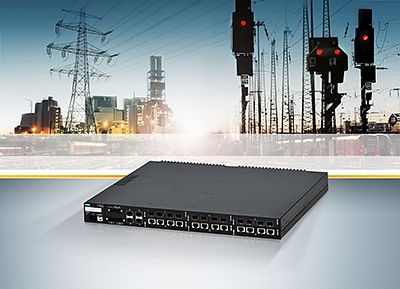 August 30, 2018 – Siemens is expanding its Ruggedcom portfolio with a new Ethernet 19-inch rack switch with Power-over-Ethernet (PoE) support, which allows for precision timing and network communication on a single network.

The CLP interface port on the Ruggedcom RST2228P allows for replacement of devices in the field using the Ruggedcom CLP removable media to automatically apply a failed device’s configuration to a replacement unit in the unlikely event of a failure.

The device features an operating temperature from -40 to +85 degrees Celsius, as well as electromagnetic interference (EMI) immunity. The product is a rugged Layer 2 rack switch with four integrated 1/10 Gbit/s uplinks and up to 24 field modular 10/100/1000 Mbit/s interfaces supporting IEEE 1588 transparent clock and PoE according to IEEE 802.3bt (draft).

The Ruggedcom RST2228P has a combined power of 500 watts with a maximum of 60 watts per port. The product can be ordered pre-configured with modules installed, but also allows for  n-field setup and modifications with separately orderable media modules: Ruggedcom RMM2973-4RJ45, RMM2973-4FC, RMM297304POE, RMM297304PFC, RMM2972-4SFP and RMM2942-4LD2, to enable simplified migration from copper to fibre optic networks (one of the major challenges of digitalization).