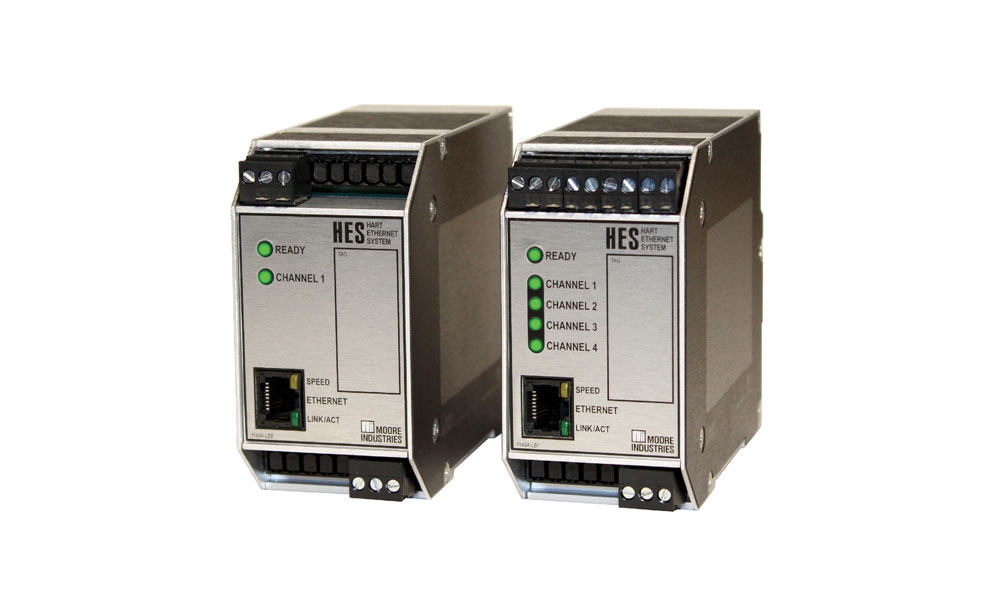 October 9, 2018 – Moore Industries has released the HES HART to Ethernet Gateway System that converts signals from up to 64 wired HART devices to Ethernet MODBUS/TCP and HART-IP.

The HES allows HART transmitters and smart valves to interface directly with MODBUS/TCP-based monitoring and control systems over Ethernet, with field device data viewable in any web browser via the HES’s built-in web server. The HES communicates with HART field devices in point-to-point and digital multidrop networks and supports both normal and burst mode communications.

The HES supports communication with HART 5, 6 and 7 field devices, which include Coriolis, magnetic, vortex, ultrasonic and multivariable mass flowmeters, along with pressure, pH, level, temperature transmitters and even smart valve positioners. The HES has sufficient memory to handle thousands of process variable and diagnostic data points from connected smart HART devices.

All HART data from connected field devices is viewable in read-only mode with any web browser via the HES’s built-in web server or a MODBUS/TCP-compliant host. The HES also supports HART-IP, allowing any of the connected HART device variables, HES variables, or diagnostics to be monitored. Support for these open industrial protocols enables interface with any process control or asset management system while taking advantage of any Industrial Internet of Things (IIoT) initiatives that facilitate the propagation of process data to higher level corporate or analytical systems.