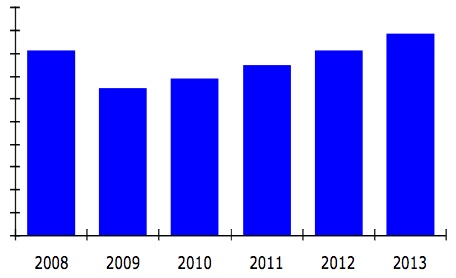 The automation systems market for discrete industries started to slow down rapidly with the economic trouble alarms that started sounding in the U.S. at the end of 2007. The manufacturing sector, initially insulated in 2008, began to feel pain and then dropped into a survival mode. The automation sector got infected as money dried up from manufacturing companies as well as from government sectors.  The automation growth continued its slide in 2009.

While the short-term forecast for the global automation systems market for discrete industries looks bleak, moderate market growth is expected during the latter part of the five year forecast period, according to a new ARC Advisory Group study.

Manufacturers will continually face challenges to raise productivity, lower product costs, reduce plant operating expenses, and improve quality in order to compete in the global market. Consequently, capital investments for automation are expected to resume across many industries as automation is vital in overcoming those challenges.

“The onward march of globalization is changing the world’s industrial landscape. Manufacturers have recognized that industrial automation is key to survival in the global economy. While investments in industrial automation is slowing down in the current economic environment, this effect is only temporary,” according to senior analyst Himanshu Shah, the principal author of ARC’s Automation Expenditures for Discrete Industries Worldwide Outlook.

Developing economies still an engine for growth
With recession-battered consumers cutting spending, the discrete manufacturing industries, such as aerospace, automotive, consumer durables, and semiconductor experienced market contraction. This is especially true in developed countries. While the global economy slowly recovers from the world’s worst economic meltdown in recent decades, moving forward will not be "business as usual" for most discrete manufacturing companies.

Economies such as India and China weathered the turmoil better than most. Such emerging economies continue to experience moderate growth and will emerge as engines of growth. Consumer spending in emerging economies will expand, leading to the emergence of new demand centers and centers of manufacturing excellence and innovation. The result will be further flattening of the world and increasing competition. Discrete manufacturing companies, which previously focused largely on developed markets in Europe and North America, will have to reconfigure their strategies to cater to consumer demands from emerging markets.

Emerging trends
The market is demanding the programmable automation controller (PAC), a multi-disciplined controller capable of providing real-time logic, motion, and process control, in addition to HMI and other functions, on a single platform. PAC offers one programming and engineering tool as well as one programming language and a single tag database for the complete system. The report identifies numerous industry trends impacting automation equipment, including machine safeguarding, energy and networking.

The report also addresses challenges faced by suppliers in this market turmoil. Diversified suppliers that focus on the infrastructure and process industries were in better shape to withstand this downturn compared to those that focus mostly on some of the discrete industries.
www.arcweb.com/res/auto-discrete