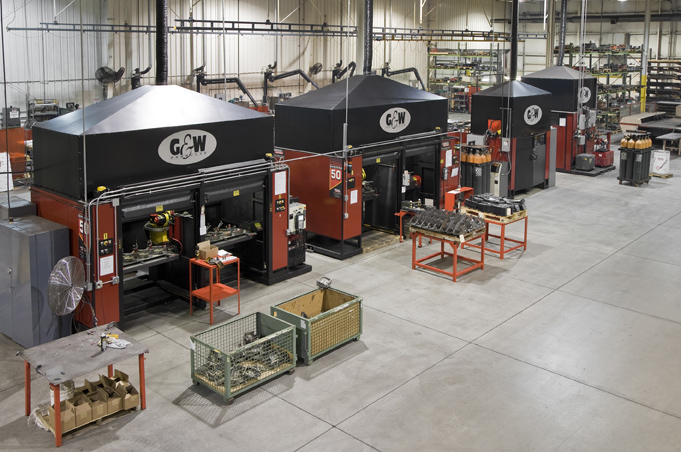 Manufacturer G&W Products has found itself well positioned to weather the current economic storm, thanks to recent expansions in technology that increased capabilities while maximizing productivity. For the last five years, Lincoln Electric Automation has been a key partner in contributing to this effort.

Despite the worldwide slowdown in manufacturing activity, the Fairfield, Ohio-based company is on track to achieve year-over-year growth between 2008 and 2009. Automated welding plays a big role in the company’s growth plan, says CEO Gary Johns.

“There is no question robotic integration has allowed G&W to be more competitive in the marketplace,” Johns notes. “It has allowed us to swiftly complete medium-to-large-volume welding work. It also has allowed us to realize significant gains in the consistency and quality of overall productivity. Automation and other initiatives have allowed G&W’s business to grow approximately 35 percent over the last three years while maintaining nearly the same number of employees.” 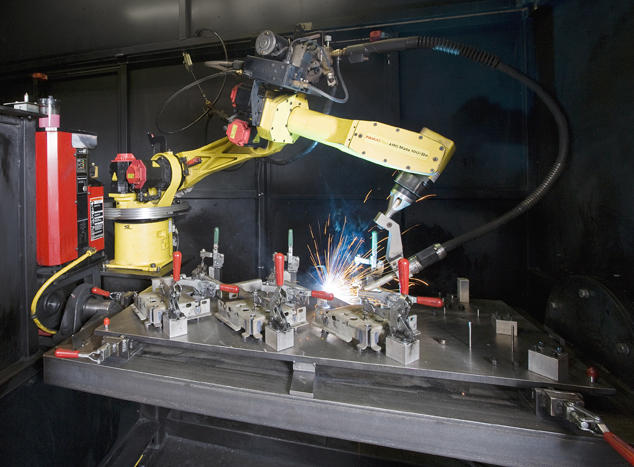 The company produces metal stampings and fabricated metal parts to customer prints and specifications. Its engineering department also works closely with customers to turn concepts into manufactured parts, and assemblies.

In addition to MIG, TIG and spot welding, G&W provides a full range of manufacturing capabilities, including laser cutting, stamping, metal forming, tool and die manufacturing, and even powder coating. This gives customers a total solution of value-added production options in a competitive marketplace. These services take the concept of traditional job shop operations to a higher level.

In the past four years, the use of robotic welding systems has become firmly integrated into the company’s list of well-established capabilities. At G&W Products, automation is not just a passing fancy; it’s now an important part of the company’s production process and a strong contributor to its competitive bottom line.

“There are many jobs we have quoted that are ideally suited for robotic welding and often it is an advantage when we are competing with companies without this capability,” explains the company’s vice president of sales, Randy Sagraves. “More importantly, this technology has fit in well with our value-added operations. As customers come to us for welding requirements, they are introduced to many other areas that can add value to their purchase. Evidence to our success with robotic welding is introduction of four additional Lincoln systems in the past two years.” 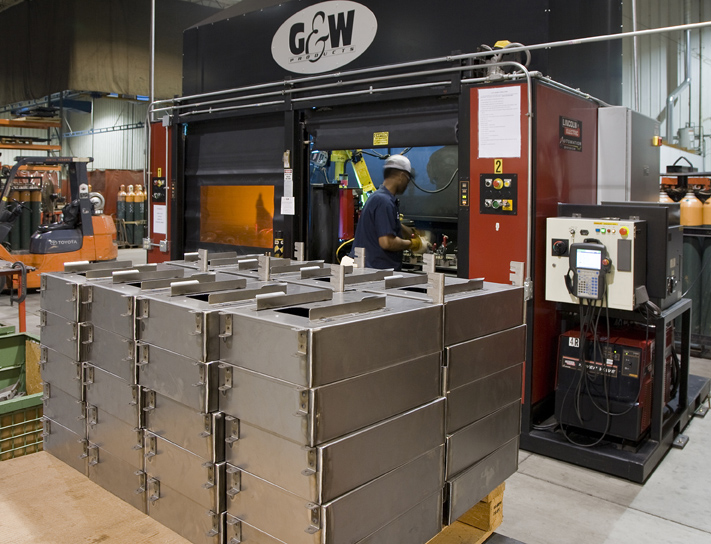 Ahead of the curve
G&W Products offers its customers more than 2,500 available welding hours each week in MIG, TIG and spot welding in both stationary and portable environments. Five Lincoln Electric robotic welding systems help the company keep pace with higher volume MIG welding demands, particularly in light of the well-documented shortage of skilled welders in the United States.

Reports from the American Welding Society (AWS) say this shortage, combined with the drive for higher productivity and reduced costs, will continue to boost the popularity of automated welding systems on shop floors. In fact, the market for welding robots is growing at a higher rate than any other industrial market. The industrial sector, as a whole, boasts sales of more than 15,000 robots a year, including welding robots. A report released in June 2008 from the International Federation of Robotics notes the supply of robotic welding systems in use in both North and South America increased 42 percent over the previous year.

That’s not to say manual welding performed by the G&W’s highly skilled team of 20 welders doesn’t have its place in the company’s production process. The size of a job plays a determining role, allowing the company to employ the substantial skills of its manual welding team more efficiently – where they are most needed.

“Most items we are welding robotically can be manually welded, as well. The factors driving us to robotic welding are related to cost and capacity, rather than capability,” Sagraves says. “Volume is the most important variable in determining a fit for robotics. With some parts, we make several hundred pieces of a particular item each month, so it makes sense to robotically weld it. This allows us to be cost effective by spreading the cost of the equipment and the fixturing over the cost of the job and while involving our highly skilled welders with jobs of varying volumes or items that are too large or complex for the robotic cells.”

Integrated system
The robotic welding area at G&W features three System 50HP Dual Headstock Robot Cells, a System RCT TurnTable Robot Cell and a System 40 TurnTable Robot Cell, all from Lincoln Electric Automation. The company produces more than 20,000 parts on its robotic systems each month, some of which can be welded six times faster than they could be welded manually.

“Our robotic line handles MIG welding of aluminum parts, high-tensile-strength steel and weldment geometries that require creative fixturing,” says Doug Keehn, G&W’s director of advanced manufacturing. “Once the fixture is proven out and the programming is completed to meet these challenges, the production and quality are quite consistent.”

Pre-engineered, the System 50HP units are dual-headstock workstations designed for medium-sized parts that can be welded using the flexibility of reorientation – something that fits well with G&W customers’ varied parts orders, which can include structural, plate, tubing, sheet metal extrusions and even special shapes.

“Both of these units are versatile and can handle some of the simpler parts we have at a higher volume, delivering increased cost effectiveness,” Keehn says.

All of the robotic systems, which are equipped with fume exhaust hoods and Fanuc RoboticsÂ® arms, deliver superior weld quality and consistency, a plus in medium-to-large volume parts production. The other most notable benefits come in setup and programming, particularly if the weld isn’t too complex, Keehn points out.

“If a part requires only a few welds, we can get sets of eight to 10 parts completed in two minutes,” he says. “What’s more, every robotic cell has two stations. While one station is welding, we can load the other side with the same part, or a completely different part, provided the filler metal and gas are the same. This allows nearly uninterrupted production.”

Programmers behind the production
The fixturing of the robotic systems are critical to the success of each product. They must be accurately designed and programmed to hold critical tolerances; easy to load and unload; designed to hold as many parts as possible; and robust enough to withstand the rigors of consistent use. G&W management relies on its team of specially trained programmers to oversee this crucial element of its robotic operations.

Some members include journeyman welders, while others on the team are experts in automation and know how to run the equipment and program it for maximum weld quality, consistency and speed. Those who were not welders by trade have received welding training so that they can know how to recognize good weld penetration and quality.

Two senior operators oversee the operation and programming of all the cells, but all of those on the robotics team have been trained in the proper operation of the units. All operators attend Lincoln’s Welding School, and the senior operators have also attended Lincoln’s Advanced Training program. The team also participates in regular internal training sessions on welding and weld inspection.

“”Our programmers’ backgrounds are varied. When we identify who is best suited to run the robots, we realize they might require additional welding training, or they might need training on the equipment and how to run it,” Keehn says. “It requires both skills. You don’t necessarily need to have a welding background, but you do need to have a strong knowledge of good welding and programming and know how to manage those cells to deliver a superior quality weld. We’re not just welding sheet metal. Our work involves many different aspects of welding.”

This move towards automation was driven by the desire for higher volume weldments and also the desire to increase value-added capabilities as a competitive advantage, Sagraves notes. He stresses that robotics isn’t just for large fabricators.

Making the move to robotics has helped reshape and strengthen G&W Products’ business, despite the challenges of a struggling economy. Johns says he believes adding robotic welding to the shop’s service offerings was one of the best strategic moves the company management has made. He says they only wish they had integrated them sooner.

“Integrating automation into our operations reflects our company’s overall direction and growth plans,” Johns says. “Efficiency is an overall theme. We’re looking to become leaner, more flexible and more competitive. Robotic welding fits perfectly into this plan. Robotics is more than a fad in this industry. It’s an ingredient to a plan to stand above the competition.”
www.gandwproductsinc.com
www.lincolnelectric.ca