Automate 2011 took place at McCormick Place in Chicago last week – March 21-24 – with an estimated 7,500 attendees and nearly 170 exhibitors – the largest crowd that the show has seen in a decade. Though official numbers have yet to be released, conference organizers are optimistic, and say that they are happy with the turnout and response.

“The show was fantastic and we’ve heard a lot of positive buzz from our exhibitors already,” said Kathleen Straight, marketing and public relations manager for the Automated Imaging Association (AIA), the Motion Control Association (MCA) and the Robotic Industries Association (RIA) – the show’s sponsors. “The show saw the largest crowd in over a decade and conference attendance more than doubled since the last show (2009).”

“Demand for solutions incorporating these technologies has been growing rapidly over the past year, so the timing is excellent for an event like Automate 2011 that focuses on manufacturing and non-manufacturing applications of robotics, machine vision and motion control,” said Jeff Burnstein, president of Automation Technologies Council, the umbrella group for the RIA, the AIA and the MCA.

“The robotics market in North America was up 49 percent in 2010 and machine vision was likely up even more,” Burnstein said. “These technologies are helping companies in virtually every industry improve productivity, product quality and profitability.”

Attendees of Automate 2011 saw the latest robotic, motion control and machine vision products on the show floor, as well as demonstrations of complete solutions from system integrators.

While the show focused primarily on current technology, it also took a look back with a special pavilion honouring the 50th anniversary of the first industrial robot at a GM facility in 1961. The pavilion provided a timeline of the industry’s growth and major milestones. 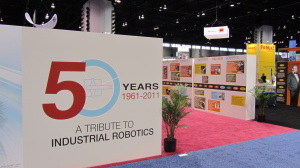 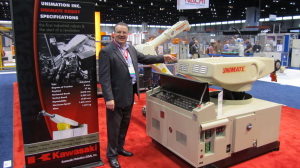 Meanwhile, an Emerging Robotics pavilion allowed attendees to take a sneak peak into the future of robotics. On display was a telepresence robot from Anybots (Mountain View, Calif.). Telepresence robots can stand in for a person, such as at an office meeting or at home, controlled from a remote location. Innovo Labs (Carson City, Nev.) demonstrated the next generation of robotic companion pets, which blur the line between technology and life by integrating organic articulation, sensory response and autonomous behaviour. Motoman Robotics, a division of Yaskawa America, Inc. (West Carrollton, Ohio), demonstrated its dual-arm SDA robot that performs complex operations that previously could not be done by robots. Mobile robots that can be used in hospitals, offices, warehouses, homes and other environments were displayed by Adept Technology, (Pleasanton, Calif.), Schunk Modular Robotics (Morrisville, N.C.) and Cycogs, LLC (Sauk City, Wisc.).

“Users told us that there are so many integrators right now that it’s hard for them to know which ones should be on their ‘short list’ of companies to consider.  We believe that RIA certification could ultimately prove to be a key factor in the decision process,” he said.

Automate 2011 was co-located with ProMat, a conference focusing on material handling and logistics. Attendees had access to both shows.