Hannover Fair, which took place at the Hannover Exhibition Center in Germany, from April 24-28, showcases the latest technologies in industrial automation from around the world.

This year, the show spanned 154,800 sq. m, taking up 17 halls. A total of 155,000 attendees and 5,175 exhibitors from 66 nations took part in the show, which featured 10 specialized trade shows within it, including: INTERKAMA, which showcased products and services for process automation; Factory Automation, which presented developments in factory automation; Industrial Building Automation, which featured integrated industrial and building automation systems; and Digital Factory, showcasing integrated processes and IT solutions.

Manufacturing AUTOMATION travelled thousands of kilometres to visit the fair, and bring you the highlights from the show floor.

Snapshots from the fair 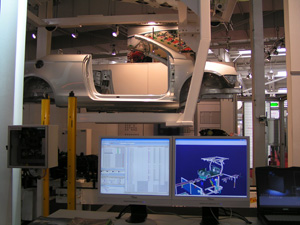 Advertisement
Siemens demonstrates how construction of the Volkswagen Eos convertible can be simulated in a virtual environment before implementation using its Simatic Automation Designer.

Volkswagen demonstrates innovative applications
Visitors to Volkswagen’s 1,400-sq.-m booth experienced a full-fledged production setup, consisting of various stations staging the manufacturing process of the automakerÃ­s Eos convertible. The circuit began with product design and engineering, where construction and simulation tools were demonstrated. At the next station, Eos components were welded together with laser technology, as onlookers saw automated assembly and user training. Here, VW presented part of its component manufacture assembly for engines, transmissions, axles and the Eos trunk lid. Next, the Eos moved into the paint shop to receive a coat of paint. Following that, the complete drive unit assembly was installed.

Attendees get crash course in robot technology
Industrial automation was one of the central themes at Hannover Fair. The show included a dedicated exhibition entitled Robotics World, which provided robots with a platform for various applications in numerous industrial sectors.

This year was the first year the fair featured the Robotics Academy, offering training to visitors interested in robots. Launched by a partnership between Volkswagen Coaching GmbH and Deutsche Messe AG, the academy was comprised of courses and seminars with both theoretical and practical elements. The training included three consecutive modules and was provided by trainers from Volkswagen Coaching. 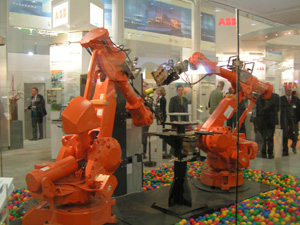 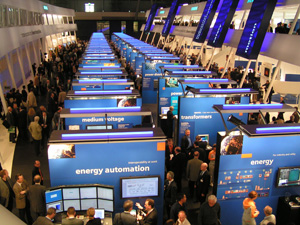 Siemens’ booth at the fair took up more than 4,000 sq. m and was three levels.

• Exhibitor participation in Hannover Fair from outside of Germany is up five per cent from 2004–the last directly comparable show. Of the more than 5,100 exhibitors at this year’s show, 2,322 were foreign companies. The total amount of display space occupied by foreign exhibitors–around 45,250 sq.-m–was also up by more than 20 per cent from 2004. The largest foreign delegation this year came from partner country India, with 343 exhibitors, followed by China, Italy, Switzerland and Turkey. Compared to 2004, there were 25 per cent more visitors from North America this year.

• A resurgence of the manufacturing sector in India is underway, India’s prime minister, Manmohan Singh, told attendees during Hannover FairÃ­s opening ceremony. “Over the past two years, this sector achieved growth rates of nine to 10 per cent,” Singh said during his speech. “We aim to raise this to 12 per cent in the near future.”

• ODVA launched a series of EtherNet/IP seminars designed to increase industry awareness and technical expertise of how to implement EtherNet/IP, the industrial Ethernet technology managed by ODVA. The free, one-day seminars for potential users and vendors of EtherNet/IP products and networks will be held at various locations around the world. For more information, visit www.odva.org.

• Turkey was named partner country for 2007 at the conference’s closing ceremony.

Technology showcase
Companies from across the globe introduced and demonstrated new products from motors and drives, vision systems and sensors, to industrial computers and software. The following is a selection of some of the technologies unveiled at the show. 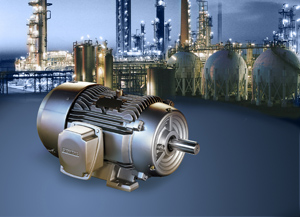 AC motor
Baldor launched a range of IEC-frame AC motors, designed to help users meet carbon emission and energy conservation targets. The Metric-E+ employs technology designed to achieve energy efficiency levels of up to 96.3 per cent. The new range spans 17 power ratings from four to 200 kW, with a choice of three speed options–950, 1,450 and 2,850 rpm.

Variable-speed drive
Emotron AB’s new generation of variable speed drives offer more functionality in a reduced size. The Emotron FDU is developed for applications such as pumps, fans, compressors and blowers, while Emotron VFX is adapted for dynamic applications such as cranes, crushers and mixers. Both drives are available in the 0.75 to 1,500 kW output range. New features include: An integrated shaft power monitor that detects deviations from normal operation over the whole speed range; compact I/O boards that allow the connection of up to four options; and integrated temperature control and extended motor protection.

System control software
Danaher Motion’s Servoshaft software package, designed for simplifying system programming, allows users to run all three main functions of a control system on their own computers: data monitoring and collection on the PC, the PLC and motion control. In addition, a graphical user interface is designed to simplify operation and reduce programming time while making it easier to optimize machine performance. The motion control solution in the package uses a graphical, highly intuitive programming language, and can be used to synchronize over 200 axes with the most complex motion relationships. 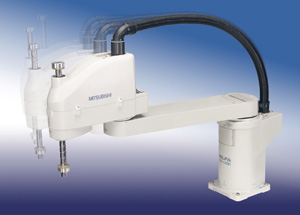 Scara robots
Mitsubishi Electric’s RH-6SH and RH-12SH SCARA robots are designed for palletizing and assembly applications. The robots have motors and transmissions, and come with intelligent servicing notification and comprehensive protection and service functions, including sensorless collision detection. The robots can handle payloads of six and 12 kg, with a reach of 850 mm. 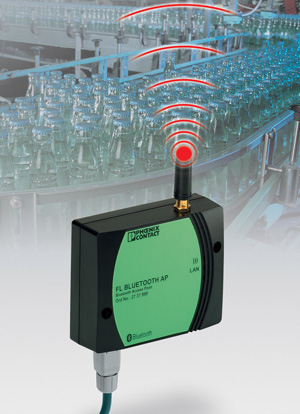 Networking Ethernet components
The Factory Line FL Bluetooth AP module from Phoenix Contact enables the wireless integration of Ethernet-capable automation components into an Ethernet network. Both IP and Layer 2 Ethernet protocols such as Profinet can be transferred because the data forwarding is performed transparently. The Bluetooth standard, which is designed to allow stable and reliable communications under adverse industrial conditions, serves as the wireless technology. Numerous wireless connections can be switched in parallel locally. The coexistence functions also allow IEEE 802.11 b/g WLAN systems to be installed concurrently. The component can be employed as an access point for up to seven participants, as an Ethernet client adapter, or as a serial Bluetooth COM server. The net data throughput is up to 400 Kbps at a range of 50 to 100 m in industrial buildings.