Student teams use automation and robotics technologies to design and build robotic machines to excavate simulated lunar soil (known as "regolith") last week. And the goal is leave your opponents in the dust — literally.

Excavating regolith, according to NASA, will be an important part of any construction projects or processing of natural resources on the Moon. The robots are tested in box containing eight tons of simulated lunar regolith that is about four metres square and about one-half-metre deep. In order to qualify for a prize, a robot must dig up and then dump at least 150 kilograms of regolith into a container in 30 minutes. The teams with the robots that move the most regolith will claim the three cash prizes. 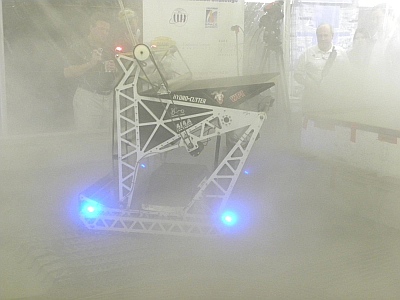 Paul’s Robotics, a team led by college student Paul Ventimiglia of Worcester Polytechnic Institute in Massachusetts won the $500,000 first prize in the 2009 Regolith Excavation Challenge that concluded on Oct. 18. The second place prize of $150,000 was won by Terra Engineering of Gardena, Calif., and the $100,000 third-place prize went to Team Braundo of Rancho Palos Verdes, Calif. 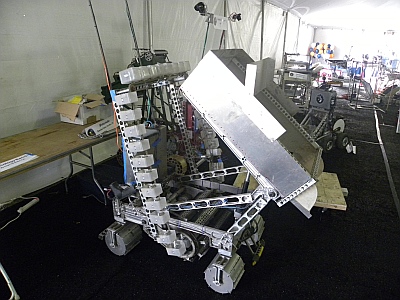 The winning excavator lifted 1,103 pounds within the allotted time. Runners-up excavated 595 pounds and 580 pounds, respectively. Regolith is difficult to dig because its dust particles want to stick together. Judges recognized the winning teams achieved real technical accomplishments because the whole robotic system has to be sturdy enough to scoop moon dirt and powerful enough to move through the dust while still meeting the weight requirements.

Twenty teams, including a team from the University of British Columbia (UBC) in Vancouver, qualified for the event that was held at the NASA Ames Research Park in Mountain View, Calif. The UBC TREAD robot team, unfortunately, did not place.

• Video No. 2: Watch the UBC team’s robot in action (YouTube)

The NASA challenge is designed to drive progress in aerospace technology of value to NASA’s missions; encourage the participation of independent teams, individual inventors, student groups and private companies of all sizes in aerospace research and development; and find the most innovative solutions to technical challenges through competition and cooperation.
www.nasa.gov
www.ubc.ca