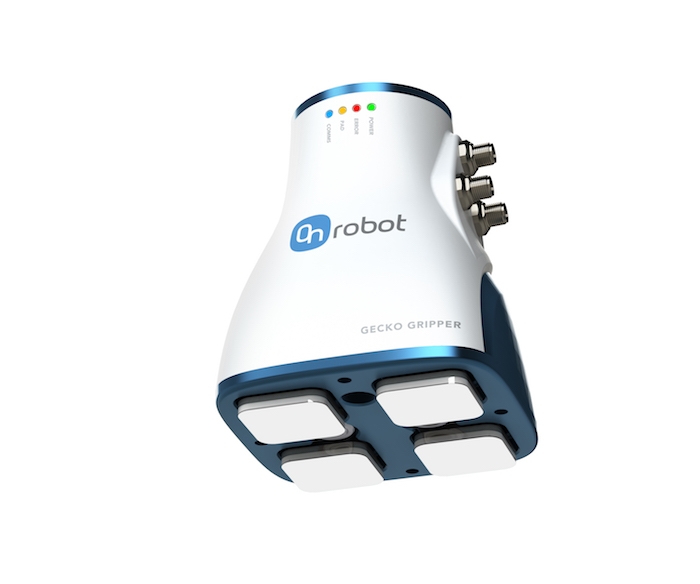 February 6, 2019 – OnRobot, a supplier of end-of-arm tooling for collaborative robots, has announced the general availability of the Gecko Gripper, its tool that uses millions of micro-scaled fibrillar stalks to adhere to a surface using powerful van der Waals forces, mimicking the same way that geckos climb.

On display for the first time at the ATX West show (February 5-7, Anaheim, Calif.), the Gecko Gripper lets robots pick up flat, smooth objects with significant energy savings over existing grippers such as vacuum grippers, which require compressed air.

The Gecko Gripper interfaces with any robot and is based on the nimble gecko lizards native to the Southern Hemisphere. Its initial design the Gecko Gripper progressed from a Stanford research project to the NASA Jet Propulsion Lab to industry through multiple collaborations. The original NASA use-case was for salvaging and repairing satellites such as solar panels, given the Gecko Gripper’s ability to operate in a vacuum.

In addition to the Gecko Gripper, OnRobot will have its RG2-FT on display at ATX, a new gripper now generally available to manufacturers around the world. An update to OnRobot’s first edition, the RG2-FT now has built-in force/torque sensing, supporting work in piece detection and centering. With inbuilt six-axis F/T and proximity laser sensors at the fingertips, the RG2-FT is the first intelligent gripper on the market that can see and feel objects, which the company says can ensure faster deployment of collaborative applications.