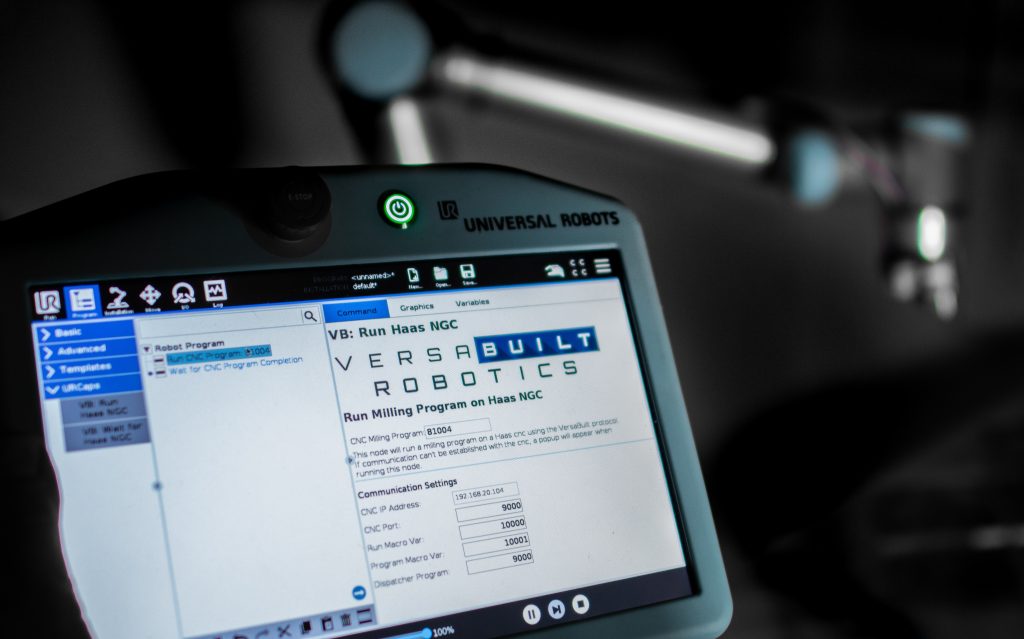 February 5, 2019 – Universal Robots has teamed up with its UR+ partners to showcase several new technologies at the ATX West show this week (February 5-7, Anaheim, Calif.), including a CNC tool called URCap that allows machine-tending applications to communicate directly with collaborative robots (cobots).

The URCap, built with partner VersaBuilt Robotics, allows a UR cobot to execute any machining program stored on the CNC directly through the cobot’s own teach pendant. Initially launching for Haas CNC machines, VersaBuilt will develop UR interfaces for other popular CNC makes later this year.

The Haas CNC Communication URCap will soon be available through the UR+ platform, a showroom of products all certified to integrate seamlessly with UR cobots. The URCap maintains all Haas safety interlock features and works with Haas, VersaBuilt and other third-party automatic door openers.

VersaBuilt’s MultiGrip workholding system will also soon be available through the UR+ platform. MultiGrip includes an automatic vise, machinable jaws and an end-of-arm tool for the UR robot. The robot and the CNC share a set of MultiGrip machinable jaws for infeed, outfeed and CNC machining.

Universal Robots is also launching a solution for random robotic case erecting called the XPAK ROBOX. The box erector, powered by a UR10e cobot arm, allows packagers to randomly erect any box in their suite on-demand without changeover. The collaborative design not only enables the operator to safely interface with the machine, ROBOX also realizes approximately 60 per cent reduction in terms of the footprint required for a similar machine using more conventional robotic technology requiring fencing.