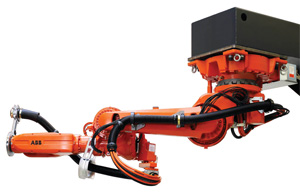 A total of 9,451 robots valued at $569.2 million were ordered by North American manufacturing companies in 2009. Unit figures were down 25% and dollars declined 36% when compared to the full year 2008 results.

In the fourth quarter, the decline came to a near stop as units were flat with the same period in 2008 and dollars were down just five percent.

“We hope that the stabilization we saw in the fourth quarter is a sign that the worst is behind us now,” said Tammy Mulcahy of ABB Robotics, chair of RIA’s statistics committee.

Despite the sharp overall declines two bright spots emerged in 2009. Life sciences/pharmaceutical/biomedical orders rose 43% in units while food and consumer goods orders rose seven percent in 2009, according to RIA.

“While these are relatively small segments of the market, it’s very encouraging to see strong growth here despite the weak overall numbers,” said Jeffrey Burnstein, president of RIA.

The near-term outlook remains uncertain, but the long term prospects for the robotics industry remain strong, according to Burnstein.

“The awareness of the benefits of robotics continues to grow,” he said. “One strong sign of the importance of robotics is the National Robotics Week initiative which has eighteen sponsors in Congress. RIA is one of many leading organizations sponsoring National Robotics Week which will take place April 10-18, 2010. The future success of our nation depends upon our ability to take advantage of critical technologies such as robotics and we’re looking forward to reaching more manufacturing and non-manufacturing companies alike with the message that robots can help them become stronger global competitors,” Burnstein explained.
www.robotics.org