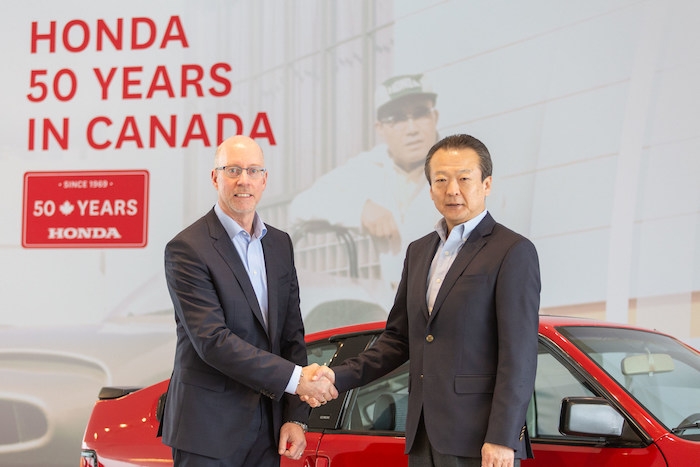 March 12, 2019 – Honda Canada celebrated 50 years in business yesterday at an event at the company’s head office near Toronto.

Honda Canada has sold more than four million vehicles since incorporating on March 11, 1969. The ceremony launches a full year of anniversary activities designed to celebrate the milestone with customers, dealers, associates and partners.

The company is also a major Canadian auto manufacturer, building the Honda CR-V and the Honda Civic.

“Honda planted roots in Canada with a vision of contributing to Canadian society. We are proud of our associates, dealers, partners and suppliers, who have played an important part in our growth and have helped improve the communities where we live and work,” says Gardner.

Four years after arriving in Canada with motorcycles and power products, Honda sold its first Civic. As the first Japanese automaker to build cars in Canada, Honda of Canada Mfg. (HCM) cut the ribbon on its first manufacturing plant in Alliston, Ontario, in 1986. A second plant was brought online at the Alliston facility in 1998 to build the Honda Odyssey minivan, and in 2008, HCM began building four-cyclinder engines at a third facility in Alliston. To date, more than eight million cars and light trucks have been built at the Alliston facility, which currently employs 4,200 associates.

In 1998, the company achieved ISO 14001 manufacturing certification. This was followed by a zero-waste-to-landfill manufacturing benchmark in 2007, engines built from 100 per cent recycled materials in 2008, LEED gold certification for the company’s head office in Markham, Ontario, in 2010 and most recently, a $492-million investment to modernize HCM manufacturing facilities and significantly improve its carbon footprint.