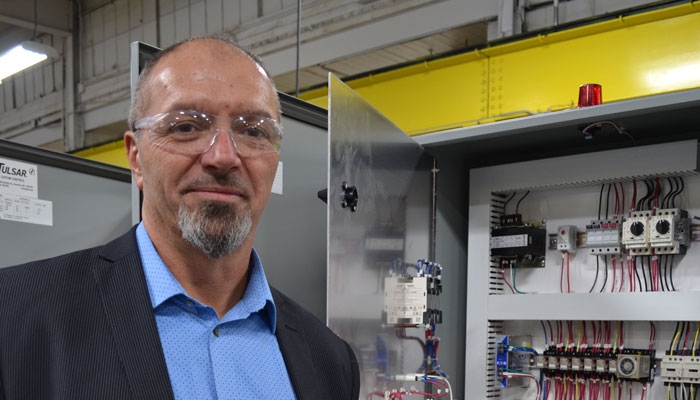 MA: What drew you to a career in manufacturing?
GM: I’ve only been with Tulsar for three years. I worked at Amazon before, but before that I was at two other pump companies and a railway manufacturer. So I’ve been in manufacturing for most of my whole career. Right now, I enjoy the R&D part of it so much, because you can put your thumbprint on things that are going to be here forever. It’s cool just designing stuff and watching it come to life. We’ve redesigned [our enclosures] and we’ve tried to eliminate hardware out of a lot of the components we use. We’re always trying to think about the end user.

MA: Tulsar Canada moved to a bigger production facility in 2017. Can you tell us more about the company’s growth over the last few years?
GM: In 2011, Tulsar was purchased by Zoeller Corporation, a manufacturer of pumps for water and wastewater, out of Louisville, Kentucky. They wanted a control panel company to add on to their product line. We were only doing custom panels when they purchased us – small little assemblies. In 2017, we relocated our 25,000 square feet space into this facility at 135,000 square feet, and since then we’ve added quite a bit of standard product manufacturing. We spent half a million dollars to open up an R&D team, so now we’re developing new products for the industry. We’ve gone from 30 people in the beginning of 2016, to 96 right now, and we’re expected to get to over 100 in the next few months.

One thing we do is try to get our customers their product on time. Back in 2016, we invested $20,000 on metal fabricating machinery for manufacturing little components, which up until then had accounted for 80 per cent of our late deliveries. So we eliminated that. Seventeen per cent of our business was in making cords for another pump company in the U.S. and in Mexico and our vendor was always late. So in 2018 we purchased the vendor out of Toronto, and relocated their 30,000 square feet of wire and cable processing to our facility here in Brantford, Ontario.

The growth that we’ve had has been incredible and it’s mainly been through either acquisition or internal sales of new product. Three years ago, the CEO [gave] me the task to grow the company from around $4 million to $20 million in five years. And we’re halfway there.

MA: Who are some customers on the industrial side using your control panels?
GM: In the Waterloo Region, we do community parks where there are splash pads for kids. A lot of the wastewater treatment facilities in Ontario, or for industry where they have pumps operating in their pits. Union Gas, Suncor, TTC, the airport.

MA: Why has it been important for Tulsar to retain many of the manual processes in its manufacturing?
GM: We try to automate as much as we can for the repeat, standard product stuff. But the custom panels are still hand-built because the applications can be critical. We have to guarantee that what we’re sending out is 100 per cent right. And we have checks all the way through. So the guys assemble it, and when the wirers start to wire it, they actually check every component that was put in there to make sure it was the right one. Because a lot of times, they’re close but they’re the wrong voltage or amperage and it can cause a problem later. And then everything out of this facility is 100 per cent tested. There’s nothing that we ship out that hasn’t been tested.

MA: Where have you introduced automation in the repeat product manufacturing process?
GM: Instead of hooking things up manually for testing, we installed a big control panel where we just put the product in, clamp it down, and hit a button and all the testing gets performed and logged automatically. If it’s a Wi-Fi–enabled product (that will alarm to your phone if there is a problem), the machine actually generates a specific serial number, so we’ll know the IP address when we have to update it.

The testing area can test up to 10 different types of products, and a product must run through testing for 250,000 cycles without an error before getting packed to go out.

MA: How are you able to solve your customers’ biggest challenges?
GM: Most people don’t understand the technology that’s available. Because of the vendors that we carry, we have the most up-to-date technology all the time. Companies like Schneider Electric, ABB, all those guys – they always call on us to explain what the latest and greatest technology is. We get invited to conferences – a recent one was Schneider in Toronto, who showed that with one little box the size of a cell phone, you can control your house or your factory. All this technology is out there, and people don’t realize it.

And a lot of the time, what our customers ask for is not actually what they need. There are not too many people who have the expertise we have in house – our engineering ability to custom-make whatever people need and provide them with a full specification.

We ran into a situation in the U.S. where we quoted a job and we got a phone call [from a customer] asking, “What are you guys smoking? You’re 60 per cent higher than your competition!” And when we sat down and went over the other quote, they weren’t getting a certified panel. They were getting a panel where the vendor had written that they don’t guarantee it meets any kind of spec – whereas we look into the codes and specs [in any province or state] and make sure that whatever comes out of this facility gets dropped onsite to be installed immediately and that it passes everything.

We communicate with our customers directly. There’s no third-party. So when a customer is talking to one of our engineers, they’re talking to the guy who is actually doing their job. We’re not assuming things, and you’re not expecting things that you’re not going to get because it was never talked about or specified.

This interview has been condensed and edited. This article originally appeared in the March/April 2019 issue of Manufacturing AUTOMATION. Read the digital edition here.