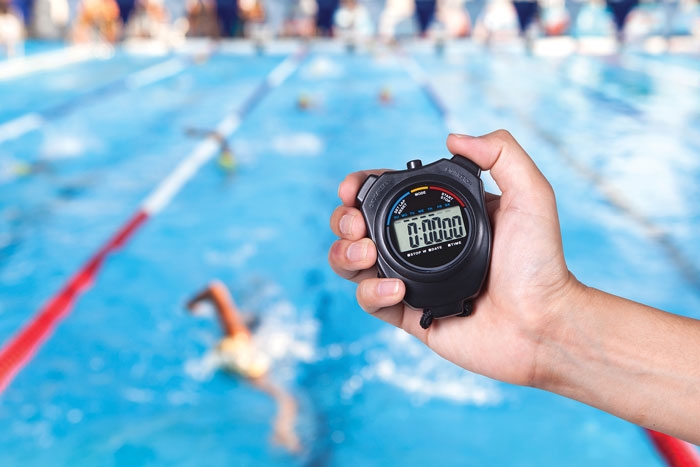 April 11, 2019 – I spent this past weekend volunteering as a timer at a swim meet hosted by my granddaughter’s club. There were 800 swimmers and 1,500 race heats. At eight lanes per heat, it meant about 12,000 individual races had to be timed, each lane manned by three qualified timers and a strokes-and-turn judge in order for the time to be “official.”

Imagine the confusion, chaos and noise – all those teenage athletes, all the family and friends cheering loudly and the constant churning of water. It all had to be done in about 16 hours, split over two days. And it all ran like clockwork.

The planning required is immense, but the organizers have the benefit of experience and processes that have been refined over many years of running previous events. Everyone has a job to do, and everyone knows their job and has been trained for it.

I got to the event at 8 a.m. The first race is at 9 a.m. All of the volunteers, myself included, have had to attend training sessions to be certified to perform the tasks. At 8:20, the race officials have a quick huddle. At 8:30, the timers and strokes-and-turns judges have an assembly to review and remind everyone of their roles, the objectives and the procedures, and at 8:45 we head down to our assigned positions on the pool deck.

At 9 a.m. precisely, the first race begins. As a timer, the process I have to follow is simple: at first whistle, I check that my watch is reset and ready. The swimmers step on to the diving blocks. Two or three seconds later, the starter says “on your mark” and my focus is entirely on a strobe light that will flash in unison with the starter’s horn. About two seconds later, the horn blasts and the strobe flashes, and my job is to start my watch as precisely as possible. The yelling and screaming begins, as fans and teammates exhort their favourite swimmers. About 35 seconds later, the first swimmer touches the finish pad, and then the other seven in quick succession. My job at that point is to focus all my attention on the lane that I am timing and stop my watch as precisely as I can to the swimmer’s touch of the wall. Within three or four seconds of the last swimmer touching the pad, the starter whistle blows, and the next group of racers step up to the diving platform. I relay the previous swimmer’s time to one of my lane-timer colleagues who records it, then I reset my watch and set my focus back on the strobe light. There is typically less than 60 seconds from the start of one race to the start of the next, and in that time, swimmers are marshalled into position on the pool deck, or out of the pool and out of the way. Six or seven hours later, the day’s racing is complete.

The whole experience drills into me the importance of process, of having everyone know their job and do it well. I also think of the swimmers, and the hours of practice they put in between meets, in an effort of shaving seconds, or tenths of seconds, off their times. My granddaughter, for instance, is at the pool training five days a week – two days at 5 a.m. before school, and three days after school. They practice with a purpose, and their purpose is to get better at each stoke, with their turns and with their endurance. With intentional and disciplined practice comes better results.

After my day timing, I got a chance to think about principles and how they can modify a process. About two hours into the event, everything was running in harmony; there was a distinct rhythm and pace to the whole process. Suddenly, the pace changed. Instead of a three-second gap between the end of one race and the whistle to start the next, we paused for about a minute. A swimmer at my end of the pool rolled to the bulkhead in her wheelchair and crawled onto the diving block where she sat instead of stood. An attendant assisted another swimmer on the other end of the diving block, helping her to stand. A few seconds later, the whistle sounded, followed by “take your mark” and the starting horn and strobe light, and the race was on. Six swimmers finished in the typical time range for the event, but the swimmer closest to me didn’t have the use of her legs and the swimmer on the other end only had the use of one arm. All the other swimmers cheered them on.

The break in the rhythm and cadence reminded me that the processes of the event are important, but they are not the reason the events are held. The events are held for the swimmers, and clubs are formed to do more than develop swimmers; they develop character, perseverance, a sense of belonging, and a sense of fair play. The clubs, and the meets, develop character in young people, not to mention teaching a thing or two to the old people volunteering.

Process and practice are more critical to success in manufacturing today than at any previous time. (Just think of the focus on Lean, for example). But principles still trump process – something to keep in mind as we consider where Industry 4.0 may take us.