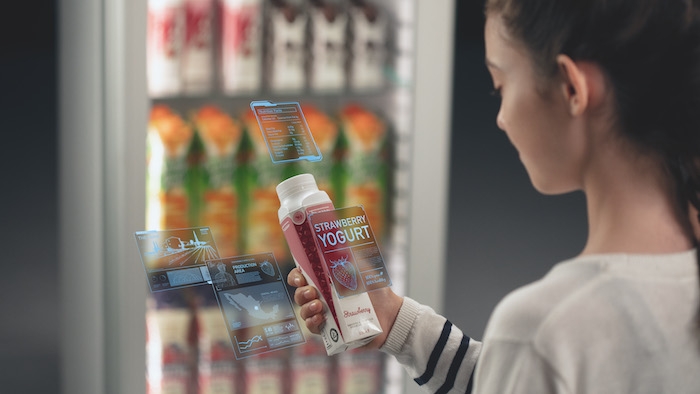 Johan Nilsson, vice-president of Tetra Pak Services, says that he believes artificial intelligence, big data and predictive analytics will be important tools to food and beverage manufacturers in the future, and that connected packaging is one way to employ those tools.

For producers, the new packaging platform will offer end-to-end traceability to improve the production of the product, quality control and supply chain transparency. It will have the ability to track and trace the history or location of any product, making it possible to monitor for market performance and any potential issues.

For retailers, it will offer greater supply chain visibility and real-time insights, enabling distributors to track stock movements, be alerted when issues occur, and monitor for delivery performance.

For shoppers, it will mean the ability to access vast amounts of information such as where the product was made, the farm that the ingredients came from and where the package can be recycled.

“Customers will have much more knowledge about where products end up,” says Nilsson.

In addition to providing traceability information to the manufacturer and consumer, Nilsson says he sees connected packaging technology as an opportunity to incentivize recycling – in the future, there could be connected waste bins that track and award “points” when a consumer recycles a product. A similar initiative is already in effect in Istanbul, Turkey, where metro riders can claim free transit tickets when they recycle plastic bottles.

Currently, the Tetra Pak platform uses a unique QR code affixed to the package that users can scan to access information, but Nilsson says the goal is to move to a printable RFID (radio frequency identification) in the future – once costs for that technology come down. “Less than half of consumers will scan a QR code,” he says. “A RFID tag can just pass by something without being active.”

Tetra Pak has three or four factories that possess the ability to place the QR codes inline on the roll of paperboard. For its other factories, the QR codes are added to the package itself after production.

“No longer is it only about product protection and functionality, it is about connectivity,” says Ivan Nesterenko, vice-president, cross portfolio at Tetra Pak. “The future of packaging is undoubtedly digital – this launch is a step towards a truly intelligent package.”

Tetra Pak has successfully completed pilots with its customers to test the new connected package and its performance in retail in Spain, Russia, China, the Dominican Republic and India, working with beverage, juice and milk producers. In Spain, a customer increased their sales by 16 per cent through a scan and win campaign tied to the new packaging.