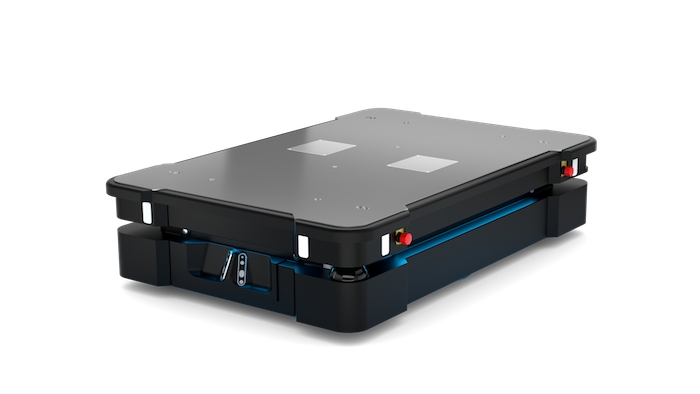 April 25, 2019 – Mobile Industrial Robots has launched the MiR1000 autonomous mobile robot (AMR), which can automatically pick up, transport and deliver pallets and other heavy loads up to 1,000 kg (2,200 lbs) through dynamic environments.

The MiR1000 is a collaborative, safe and flexible alternative to fork lifts on the factory floor.

The MiR1000 joins the manufacturer’s family of AMRs for heavy and light transport that optimize logistics throughout the entire production chain, from the warehouse to the delivery of goods.

With artificial intelligence (AI) capabilities incorporated into the software and strategically placed cameras that function as an extended set of robot sensors, MiR has enabled its robots for optimized route-planning and driving behaviour. The cameras, called MiR AI Camera, enable the robots to detect and recognize different moving obstacles and react accordingly.

For example, the robots will continue driving as usual if they detect a person but will park if they detect an AGV, so the AGV can drive by. The robot can also predict blocked areas or highly trafficked areas in advance and reroute instead of entering the blocked area and then re-routing.

The MiR1000 has two flexible pallet lifts for the two most commonly used types of pallets: the EU pallet and the 40” x 48” pallet. Like MiR’s other AMRs, the MiR1000 can be programmed via the user interface, or through the MiRFleet robot fleet management system.

The AMRs can also integrate different top modules such as pallet lifts, conveyors, a robot arm or other options to support a wide range of applications.