Features Education & Training
Reskilling in the age of automation 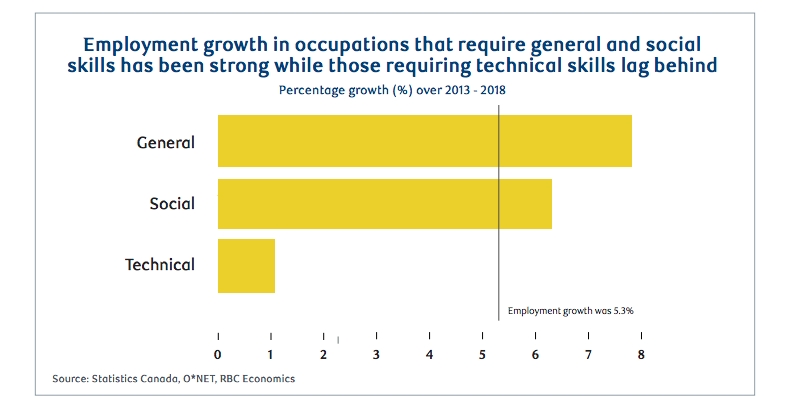 June 3, 2019 – The skills gap is one of the biggest issues facing Canadian manufacturers today, whether from loss of knowledge due to retiring employees or automation shifting the types of roles that are available to human workers.

The skills gap does not only affect the C-suite. It should also be of major concern to workers on the factory floor – and not because their jobs are going to be threatened. Thought leaders are in agreement that increasing automation will not lead to job losses – but it will lead to new and revised job descriptions. Those descriptions will include the types of human skills that a robot can’t imitate – from critical thinking to empathy.

So what should workers and manufacturers be aware of as they ready themselves for reskilling in the age of automation?

The gender factor
According to a new report by the Royal Bank of Canada (RBC), the jobs at high risk of being eliminated or affected by automation are more likely to be held by women – but women also possess more of the skills required for the “jobs of tomorrow” than men do.

The report, titled “Advantage women: how an automated future could play to women’s strengths,” indicates that of the 35 per cent of Canadian jobs that are at high risk of being threatened by automation, women hold 54 per cent, or 3.4 million, of them. Many of these are administration, bookkeeping and data entry roles, which are all more likely to be filled by women.

However, the report shows that women are more likely to already have the “human” skills – such as generalist and social skills – needed for the new jobs that will be created from automation. These roles include jobs that involve contact with the public. (In a separate study, Accenture recently identified complex reasoning, creativity, socio-emotional intelligence and sensory perception as the skills becoming most important in almost every work role.)

Dawn Desjardins, vice-president and deputy chief economist, and Andrew Agopsowicz, senior economist at RBC, authored the report. They say that the need for generalist skills will increase as machines replace task-oriented jobs – and since men are twice as likely as women to work in those at-risk, task-oriented manufacturing roles that don’t have close post-automation substitutes or equivalents, they are behind in developing those generalist skills.

The authors also report that occupations requiring more general and social skills have grown 33 per cent faster than the national average.

“Much of the reskilling conversation in Canada has focused on the retraining of manufacturing workers who fall victim to well-publicized plant closures,” the authors say. “But many of the jobs that are under threat – and disproportionately held by women – disappear in silence.”

Changes in culture and policy
Desjardins and Agopsowicz also indicate that while women may be better positioned than men to deal with the transition, women are underrepresented when it comes to management roles. Men become managers more often and at an earlier age than women, which makes it difficult for women to catch up.

For example, about 6.8 per cent of men aged 25 to 29 are employed in management positions, compared to 3.9 per cent of women. Manufacturers must foster an environment where women have access to promotions. But Desjardins and Agopsowicz also suggest further policy changes at the government level – such as better access to labour market data and programs to assess “soft” or “human” skills – that would benefit workers no matter their gender.

Opportunities for training
In another study titled “Humans wanted: How Canadian youth can thrive in the age of disruption,” the Royal Bank of Canada stated that more than half of Canadian jobs will require a skills overhaul in the next 10 years.

There may be some reskilling help coming in the near future. In its 2019 budget, the federal government includes a potential benefit to help workers train and upgrade their skills.

The Canada Training Benefit offered by the current Liberal government would include an investment of more than $1.7 billion over five years – starting in 2019-20, after the federal election this fall – and $586.5 million per year ongoing.

The broadest part of the benefit is a training credit applying to eligible workers between the ages of 25 and 64 who are earning at least $10,000 per year to a maximum of $150,000.

Each year, the worker would accumulate a credit balance at a rate of $250 per year, up to a lifetime limit of $5,000. The credit could then be used to cover half the costs of a course or training program.

For example, a worker could accumulate their training credit balance for four years to have $1,000 to claim against training or tuition fees of $2,000 or more from colleges, universities and eligible institutions.

Whether the Canada Training Benefit comes to fruition or not remains to be seen, but, with the government’s announcement, manufacturers are now even more aware that the skills gap is an issue of great importance.