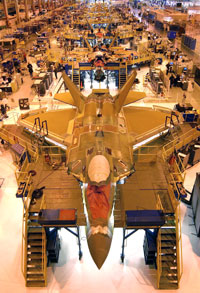 By June 2002, it was time to move into production mode. With the help of Delta Sigma Corporation, a provider of industrial automation and robotics for the aerospace, automotive and other industries, LM Aero launched a high-rate production line for the F/A-22 Raptor. This new production line has boosted the rate of production dramatically, according to the two companies. By next year, LM Aero expects it will be producing one plane every six days.

The F/A-22 Raptor’s fuselage is manufactured in three pieces. The front section is built in Marietta, the midsection is made in Fort Worth, Tex., and the aft section is produced in Seattle, Wash., while final assembly takes place in Marietta. The performance specifications of the F/A-22 Raptor have driven the manufacturing requirements to tolerances that are uncommonly tight, even for aviation. A top priority for LM Aero was to have the ability to quickly and accurately align and mate the three large fuselage sections.

“A major obstacle that the alignment system had to overcome was we required a TIR (total indicated readout) of 0.004 inches from the designed centre positions of 16 wing nodes spanning 18 feet on each side of the plane,” says LM Aero’s James Keywood, manager, tooling department, F/A-22, during the design and building phase of this system. “No two nodes have a common axis. Other design goals were quick set-up, simple operation, robust design, rapid alignment and mate and, of course, accuracy. [We went with] an “airplane-in-the-loop’ design that guaranteed all of our critical points would be where they belong.” 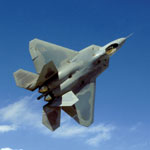 Another critical element of the tool design was the ability for the entire assembly jig to move down the first 278 feet of the assembly line, and then return to the start of the line under its own power. LM Aero engineers designed a “skate” concept and Delta Sigma Corporation, a provider of industrial automation and robotics for the aerospace, automotive and other industries, won the bid over the competition to automate the skates. Delta Sigma designed and built the mechanisms that provide drive power and facilitate the transition between the precision rail, wheels and steering controls, according to Keywood. “Delta Sigma also designed and built the precision alignment system on top of the skates using an eight-camera machine vision system and a 16-axis servo system,” he says.

After the fuselage is assembled, the wings cross the mid-aft mate joint with roughly half of the nodes on each side of the joint, while the tolerances are very tight. LM Aero requested non-contact, three-dimensional measurements with sub-mil accuracy in eight locations, so Delta Sigma provided six cameras that measure wing nodes and two cameras that measure tooling holes in the weapons bay. LM Aero wanted setup to take no longer than 10 minutes, and new operators to be able to set up and use the system with less than an hour of on-the-job training.

Dr. Brett Haisty, vice-president, engineering, Delta Sigma, was responsible for the system’s design. “We selected DVT for our machine vision cameras even though we had never used them before,” he says. “We designed a set of “pins’ and put the cameras in them. The cameras fit in a set of tooling holes that look into the wing lugs. This accurately simulates the wing joining the fuselage. Since the cameras are inside the pins that attach the wings, the cameras measure the misalignment and report the errors back to the control computer, which, in turn, calculates the moves required by each axis to solve 14 axes simultaneously.”

Haisty says he figured out how to recalibrate the cameras every 60 milliseconds to achieve the accuracy specification. He then developed a precise geometric model that allows the control software to analyze how motor movement will affect measured positions before the motor moves. The fuselage is extremely rigid, according to Delta Sigma, so it is impossible to align just one point at a time.

While the “airplane-in-the-loop” concept leaves nothing to chance from a measurement standpoint, it makes the control system much more complex, due to the cross-axis coupling that is inherent when the motion input and measurement positions are located far apart. It generally takes seven motors on one fuselage section to move one wing node into position. That’s because it’s impossible to move one node without moving all of them. So, all seven motors will have a new position to align each node without losing position on the other nodes. A traditional “seek zero” algorithm would simply cause the plane to go into an unrecoverable oscillation.

“This program has been an example of what teamwork is all about,” says LM Aero’s Keywood. According to him, the aircraft manufacturer made every major milestone on time during the period leading up to the company’s first fuselage in June 2002. In fact, the new tooling was completed one aircraft ahead of the schedule.

The project was so successful, in fact, that LM Aero in Fort Worth purchased a similar system to assemble the mid-fuselage section. Says Dave Penny, senior manufacturing engineer at the Fort Worth plant: “We have a few differences from the full-fuselage mate design, but conceptually our system works like the Marietta system.” The Fort Worth plant installed two of these assembly systems, and plans to install a third in the third quarter of 2006.

Roger Richardson is president of Delta Sigma Corp. E-mail him at roger@deltasigmacorp.com.