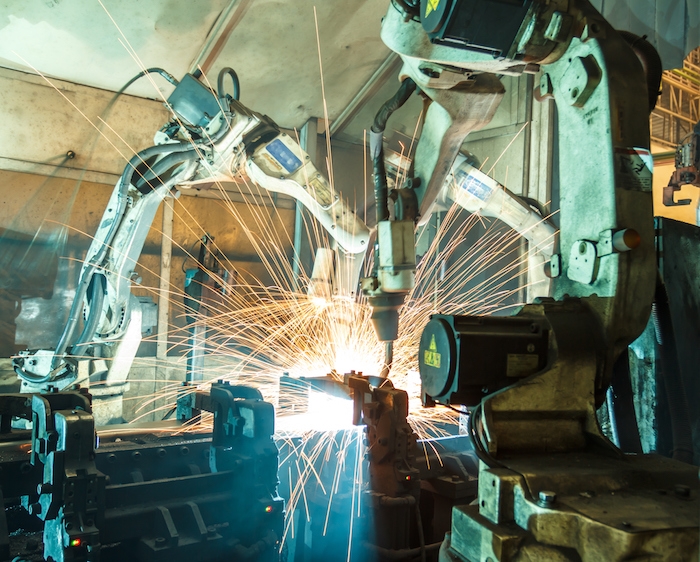 Growth was mainly driven by installations in the automotive industry. In Canada, as in around the world, one of the most common uses for industrial robots is arc and spot welding.

In addition, by taking the human element out of the welding process, robots eliminate operator dangers such as electric shock, exposure to gases and toxic fumes and flash burns to the eye’s cornea. Ironically, with the implementation of these robots, new dangers have replaced the old ones – which is why it is critical for manufacturers to follow best safety practices when implementing a robotic welding program.

The first recorded death by robot happened in 1979 when a worker collecting parts from a storage facility was hit and killed by a one-ton robotic arm. Fast forward to June 2015, when a German Volkswagen factory employee was crushed to death when setting up an industrial robot. A month later, a similar type of accident involving a robot occurred in India. And yet another accident happened later that same year at a Michigan auto parts manufacturer where a robotic arm swung and crushed the head of a maintenance worker between a hitch assembly. In December of last year, a Chinese worker was impaled in a horrific accident by a rogue robot in a porcelain factory.

Closer to home, in August 2016, a maintenance worker in an Ontario manufacturer entered a robot cell without locking off the power. While carrying out the repair, the worker felt pressure and saw it was the robot pressing the back of his body. Although two colleagues were able to retrieve him, the worker still suffered serious and permanent injury.

Robot accidents typically occur during non-routine operating conditions, such as programming, maintenance, testing, setup, or adjustment, when the employee is temporarily within the working envelope. In most cases, safeguards are either absent, improperly installed, or were bypassed by the employee.

Who is responsible for robot safety?
In Canada, robot safety is shared between all stakeholders ranging from manufacturer to end user, as outlined in CAN/CSA-Z434-14, Industrial Robots and Robot Systems. It is an adoption, with Canadian deviations, of ISO 10218-1 & 2 from the International Organization of Standardization. By adopting ISO 10218-1 & 2 the robot standards for Canada’s CSA, USA ANSI, ISO and EN ISO are harmonized with the goal of moving toward a single global standard that is consistent from country to country in the design and application of robotic cells. The measures and procedures of the Industrial Establishments Regulation also may apply.

According to the standard, the manufacturer, integrator and installer have the shared requirement to provide “information for use” to the user of the robot and robot system. The user has the responsibility to apply this information in developing training and safe work practices. That said, the standards largely speak to the supply chain and do not tell end users how to safely run robots or even how to turn them on. Canada did add value by offering user-directed information in annexes to its standard rather than in separate technical reports like in the U.S. version.

Understanding robotic safeguarding
The first step in developing a safety strategy for a robotic welder or any type of robot is to conduct a risk assessment that takes into account the severity of potential injury, frequency of exposure to a hazard and the probability of injury. Once an option, a thorough risk assessment is today required in CSA-Z434.

Once completed, an action plan must be implemented to take on the hazards identified by the risk assessment. Typically, an effective safeguarding system for robotic welders is a combination of electrically interlocked perimeter guards, safety light curtains, safety laser scanners and pressure-sensitive safety mats. Automatic weld curtains and high-volume ventilation systems can also minimize exposure to hazards in the welding environment. Torch length and robot reach must to be factored in when designing the system. Here is a review of suggested equipment:

Along with these measures, it is critical to remember the human variable. For instance, if a safeguard prevents the operator from loading or unloading parts from the cell, they may remove it without understanding the dire ramifications. Improperly designed safety equipment frustrates workers or, worse yet, leads to a false sense of security, and ultimately can create accidents.

Training is essential: Employees must be familiar with all operational aspects of a robot welder, including the full range of motion, known hazards, programming information, locations of emergency stop buttons and power sources, and the importance of safety barriers, as well as procedures for freeing a colleague who becomes trapped.

Welding has always been a dangerous job, and there is no doubt that robots are making it safer by performing hazardous, repetitive tasks. But given the fact that tens of thousands of industrial robots are now working in close proximity with employees and often do not have the sensory ability to detect if those employees are in their vicinity, safety must to be kept top of mind.
_____

Carrie Halle is the vice-president of marketing and business development for Rockford Systems, LLC.