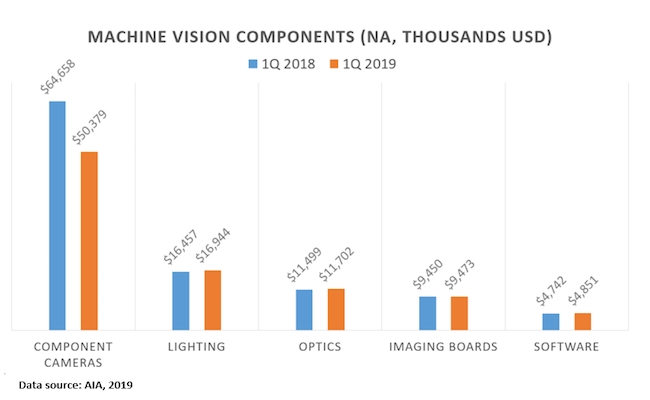 June 24, 2019 – First-quarter sales of machine vision components and systems that provide vision intelligence to robots and other machines declined 4.5 per cent in North America over the same period last year according to the AIA, a trade group that’s part of the Association for Advancing Automation (A3).

“Based on what we were hearing from our member companies at the end of last year and into the new year, we expected the statistics to reflect fewer sales for the quarter,” says Alex Shikany, vice-president of membership and business intelligence at A3.

“The semiconductor industry, which is a leading indicator for machine vision, showed signs of contraction at the end of last year, which led us to believe lower sales figures might’ve been ahead to begin 2019. Fortunately, machine vision technologies are still becoming smarter and smaller to fit within in-demand automation applications such as AI-driven bin picking, autonomous vehicles, and advanced inspection technologies, which is a positive indicator for the future health of this industry.”

Overall, two-thirds (66 per cent) of respondents believe the overall machine vision market in North America will remain flat in the next six months.