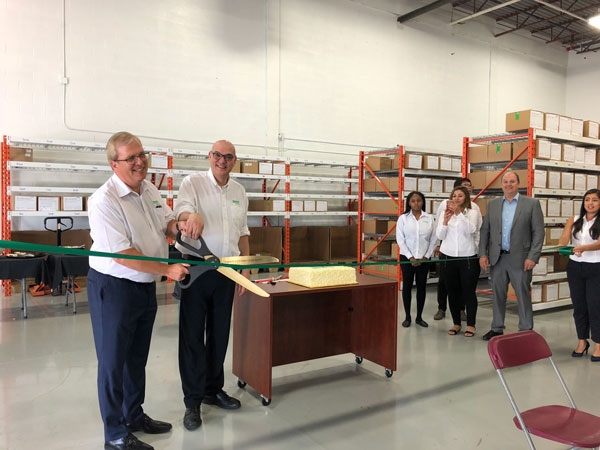 The event, held July 10, 2019, was a chance for Murr Canada clients to tour the new space, hear presentations on connectivity and the Internet of Things (IoT), enjoy a BBQ lunch and witness a ribbon cutting.

Room to grow
The Murr Canada team moved to #9-2840 Argentia Rd., located west of Toronto near the junction of highways 401 and 407, after outgrowing their previous location in Mississauga, where they’d been for five years.

The new facility consists of 6,000 square feet of warehouse space and 3,100 square feet of office space, with all of the window and door trim painted in Murrelektronik’s signature bright green. The warehouse has room to grow, and the team is working on getting all the shelving equipped with scannable barcodes for easier and more accurate inventory counts.

The building, which had been previously tenanted by a food supplier, took two months to renovate and is now equipped with a new HVAC system, new sprinklers, new electrical system and updated flooring in the warehouse. A large boardroom will also house technical training sessions for customers. 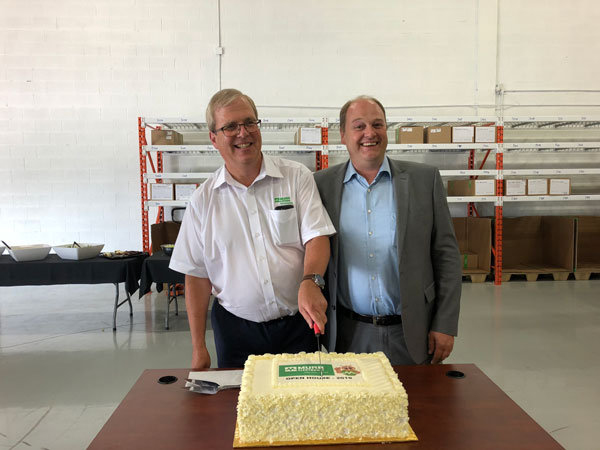 The Canadian operations employ 21 staff – 19 in Mississauga and another two in Montreal to service the Quebec region, which Bob van den Berg, Murr Canada’s general manager, says is a significant growth area for the company.

Cables and connectors account for about 60 per cent of Murr Canada’s business, with another 20 per cent coming from I/O solutions and the balance coming from power management and connectivity interfaces.

Murr Canada has experienced 2.8 times growth in sales since van den Berg took the helm in 2014. He says the company’s mission to improve customer competitiveness by providing automation solutions alongside excellent customer service has been integral to its success in Canada. 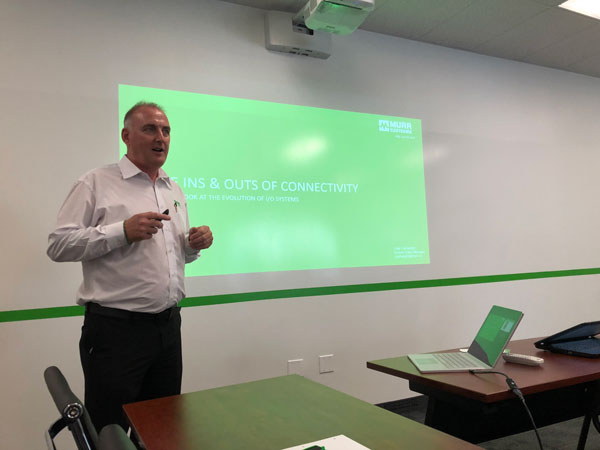 Connecting to the IoT
Michael Engel, fieldbus product manager for the automation business unit at Murrelektronik’s headquarters in Oppenweiler, Germany, was on hand at the grand opening to demonstrate the Nexogate, the company’s diagnostic gateway to the Internet of Things (IoT), which is making its North American debut.

Nexogate enables cloud and ERP connectivity via an encrypted communication path, and is placed beside a PLC “so you don’t have to replace your whole system in order to connect your machine,” said Engel.

The device sends data from control and I/O components in real-time into a web-based dashboard, where operators can remotely monitor readings such as the temperature, supply voltage and connectivity status of their connectors to help identify failures before they happen. The dashboard’s topology map also shows a schematic of all connectors, as well as the status of every port.

Nexogate is compact in size, underscoring the company’s “zero cabinet policy,” which endeavours to minimize the amount of enclosure space needed in an application. Colin Cartwright, system sales manager for Murr Canada, says reducing panel space not only saves room on the factory floor, but also can reduce costs spent on large enclosures.

See more photos of the grand opening event below.