Exoskeletons are entering the mainstream. What does it mean for manufacturers? 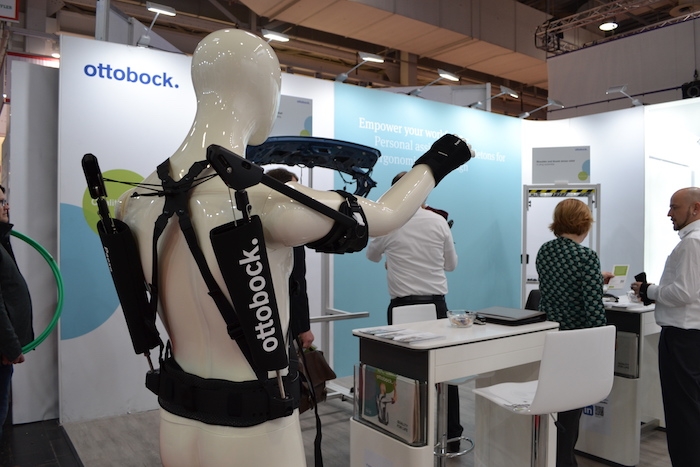 An exoskeleton by Ottobock was on display at Hannover Messe 2019.

August 29, 2019 – Exoskeletons, or exosuits – wearable IoT devices to be put on a worker’s body – have turned out to be irreplaceable helpers in manufacturing.

They protect workers and help them avoid work-related injuries as well as augment their capabilities, making them more powerful.

By leveraging exosuits on their production sites, manufacturers can reduce incident rates, increase overall productivity and boost workforce morale. Employees, in turn, may take a liking to the idea of being protected and technically assisted.

Exoskeletons protect workers from injury
Worker safety stays an undeniable priority across all industries with occupational risk factors. The number of manufacturing-related workplace fatalities increased in Canada nearly 50 per cent between 2016 and 2017, according to the Association of Workers Compensation Boards of Canada. Lost-time claims in manufacturing were also up over 10 per cent for the same period.

As a result, manufacturers are striving to provide the safest working conditions for their employees. This is where exosuits come in handy.

Let’s look at the tidal wave of exoskeleton adoption and consider how such manufacturers as BMW, Ford and Audi equip their employees with exoskeletons for safer and better performance during their day-to-day working activities.

1. General Motors and the RoboGlove
One of the oldest examples of how industries turned to exosuits for worker safety improvement is General Motors’s RoboGlove. Aimed at delivering extra muscular strength, this powered exosuit uses a belly-mounted battery, controllers, an adjuster button and peripheral sensors. The latter are located on the fingertips so that the sensors can detect when the gripping force is needed.

The predecessor of the RoboGlove saw the light in the wake of GM and NASA collaboration. Back in 2011, it was explicitly designed for space works that are outside of human capabilities.

2. Noonee and the chairless chair
Not only powered exosuits are in industrial demand, though. Unpowered, or passive, exoskeletons don’t use any electrical power source and operate through employing springs and locking mechanisms. Probably, it’s these capabilities that determined such popularity of these exosuits across heavy-operation industries: they don’t have batteries and thus can deliver uninterrupted work all day long.

Audi and BMW have already adopted such exosuits developed by Noonee, a Swiss company. Designed for the lower part of the body, the so-called chairless chair is worn on top of a worker’s pants. It locks into place and takes the pressure off the knees when a worker has to crouch or stand for too long. As stated on the Noonee official website, this fully mechanical exosuit promises to reduce pressure on the knees and feet by 65 per cent.

3. Wyss Institute and the back support exosuit
Although not yet in use by manufacturers, Wyss Institute’s exosuit is well-placed for becoming an industrial staple soon. As reported by WHO, the lifetime prevalence of non-specific back pain is estimated at 60 per cent to 70 per cent in industrialized countries, so this back-supporting exosuit may become a decent contribution to employee well-being.

Powered by a lightweight monitor and sensors, this soft exosuit detects a worker’s movements and adjusts the back support when it’s needed. At other times, the system remains “transparent,” which allows workers to feel comfortable while performing non-lifting activities.

Wyss Institute still hasn’t announced the release date of the exosuit, but as it’s currently going through the stage of de-risking, we should expect its market launch anytime soon.

Exoskeletons augment workers’ capabilities
As physical strength significantly determines a worker’s productivity in heavy industries, augmenting human capabilities via exosuits turns to be a valuable asset in the hands of employers.

Let’s see how exoskeletons do it while making them more powerful and hardy.

1. Ekso Bionics and the EksoVest
Designed by Ekso Bionics, the US-based manufacturer of wearable robots, EksoVest is a passive exosuit already applied across 15 Ford plants. This weight-distributing vest allows workers to perform longer with their hands raised. The springs-powered exosuit distributes the arms-allocated weight throughout the body, literally holding a worker’s limbs.

As it allows Ford’s employees to be hardier, EksoVest also prevents possible arm and shoulder injuries. It seems the vest does its job: Ford’s 2018 incident rate was one of its lowest ever.

2. Sarcos and the Guardian XO
Full-body exosuits provide support to all the body parts at once but prove to be too expensive and not very mobile. Nevertheless, manufacturers don’t completely ignore them.
Guardian XO, a full-body exosuit developed by Sarcos, is designed to augment human power and productivity, so it allows workers to lift loads up to 200 lbs (91 kg) without exertion. Powered by actuators and sensors, the exosuit demonstrates a strength amplification of 20 to one, meaning that 100 pounds load (45 kg) feels as light as five pounds (2.2 kg).

Guardian XO is planned to reach industrial plants as early as in 2020, yet the price is still to be announced.

What lies ahead for industrial exosuits
Generally speaking, it’s no doubt the exosuit market is expanding rapidly. Not full-scale automation yet a feat of augmentation of human abilities, the industrial application of exosuits creates an effective tandem of a human and a wearable robot.

In the nearest future, this concept will motivate more companies to bring the exo-innovation to their own production areas. As a result, this trend is bound to make exosuit developers even more inventive.

One of the possible scenarios of industrial exoskeleton improvement is its integration with data analytics. Insights generated from IoT sensors and devices can help to make predictions based on statistical techniques and machine learning. Connected with mobile control panels or other wearable devices, exoskeletons would allow managers to control staff’s performance and monitor their current physical state.

Jan Guardian is the head of digital marketing at Itransition, a custom software development company headquartered in Denver, Colorado.