Many CEOs think that their security systems are just for opening doors, but John Nordigian is a visionary with a long wish list of high technology security functions that go well beyond access control.

When the time came to replace his antiquated legacy security system, the CEO of electronic parts manufacturer Norstan Inc. envisioned video monitoring of his plant from anywhere in the world with his mobile communication devices. Nordigian also hoped state-of-the-art security technology could provide biometric time-clock auditing, reduce insurance costs, attract and retain Fortune 500 clients, increase profitability and, of course, secure doors throughout his 40,000-square-foot Pleasant Prairie, Wis., facility. However, Nordigian’s visions began looking like pipe dreams when he had difficulty finding a security provider with the hardware, software and integration skills. A few candidates had equipment limitations that wouldn’t allow the integration of Norstan’s existing five-door HID format key FOB door reader system, which would have cost approximately $2,800 to replace and install, plus productivity losses during installation. Other candidates couldn’t integrate many wish-list innovations into their systems. All of the candidates, except for one, said video monitoring from a mobile device abroad was impossible.

The one vendor with both the equipment and the integration skills to make Nordigian’s security visions come true was Miamisburg, Ohio-based Matrix Systems, and its enterprise-based access control system, Frontier Universe. The system uses HID VertX subsystems, and its open architecture features allow easy integration of today’s third-party technology, as well as future innovations.

“We had sales presentations by salespeople that didn’t know their systems very well,” said Nordigian, whose company is a job shop that custom manufacturers contacts and stampings for electronic devices in the appliance, aerospace, control, elevator, toy and other industries. “Matrix’s presentation was by sales people that were also technicians, so they knew exactly what could be done [to] make it happen without stalling and making a lot of phone calls to their headquarters.”

A key aspect of Matrix Systems’ integration work was upgrading the resolution of seven existing analog Ganz CCTV cameras by CBC (Americas), of Commack, N.Y., and integrating them into a new video surveillance hardware/software system, by Irvine, Calif.-based GeoVision. Norstan saved approximately $3,000 in labour and equipment by using the existing cameras. Ten Geovision high-resolution digital cameras were also added to the system.

The main challenge in updating the CCTV system was integrating Nordigian’s iPhone and Droid-X mobile apps, and his laptop computer into the system for monitoring anywhere around the globe. The mobile apps connect Nordigian to any number of plant video cameras within seconds, versus waiting for a laptop or PC to boot up. Future video improvements will include a conversion to IP to integrate into the Frontier Universe system, and video voice-over to add audio capabilities for instantaneous feedback and communication. 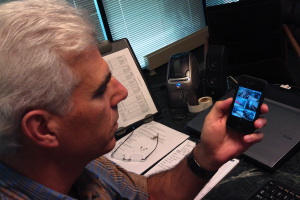 The mobile devices are also invaluable for after-hours alarm situations where Nordigian can go online within seconds after receiving an alarm phone call and inspect the entire plant from home or abroad. Nordigian finds the iPhone’s AT&T network more reliable abroad than the Droid-X’s Verizon network. Domestically, the iPhone’s DGI software also beats the Android GDA counterpart in loading time and functionality, such as remote operating tilt/pan/zoom capabilities on surveillance cameras.

The remote mobility feature is also capable of temporary access authorization, such as allowing an industrial service contractor into a secure area to repair a particular stamping machine.

The video surveillance is also recorded on an NVR/server, which Nordigian finds valuable for investigating incidents inside a 60-day window, such as a delivery-truck driver’s claim that the building wasn’t open upon arrival. The real-time monitoring and recording capabilities also alert potential thieves that video evidence will aid criminal prosecution.

The recording capabilities have already been useful in investigating a trespasser who placed illegal materials in the facility’s dumpster, which could result in fines or recycling fees for Norstan.

“We can inform a trespassing company that we have video evidence of an employee disposing waste in our dumpster,” Nordigian said. “Once things like hazardous materials get dumped on your property, you’re responsible. If you have a video record of it, then you can file police reports and make the perpetrator liable for the proper disposal or recycling expenses.”

“We were told we would receive much better insurance quotes after our security system was upgraded,” said Nordigian.

Besides lowering operational costs, the upgraded system is also attracting and retaining clients. Many clients want the assurance that the precious metals they own and provide to Norstan are under close surveillance.

“After we supplied the detailed plans of the installed Frontier Universe and GeoVision systems, a client was impressed with our system and commitment to protecting their on-site assets. As a result, they chose to retain our services versus going to a competitor,” said Nordigian.

Adding more functionality to Norstan’s security was the impetus for replacing the prior access control system, which stopped providing updates for Microsoft SQL platforms and also crashed periodically. For example, many employee subgroups have been created for various authorization levels. Now sensitive area access, such a precious metals inventories, tool areas and IT rooms are accessible to employees authorized by the system with full audit trails provided by Frontier Universe.

Employees see benefits as well, such as improved protection for personal property. The system offers a safer work environment because of its capabilities to terminate former employee access just moments after dismissal.

In the future, the new security system will allow Nordigian to incorporate more of his high technology wish-list items into the system with little integration cost, which will help lower operational costs, increase profitability and enhance security.