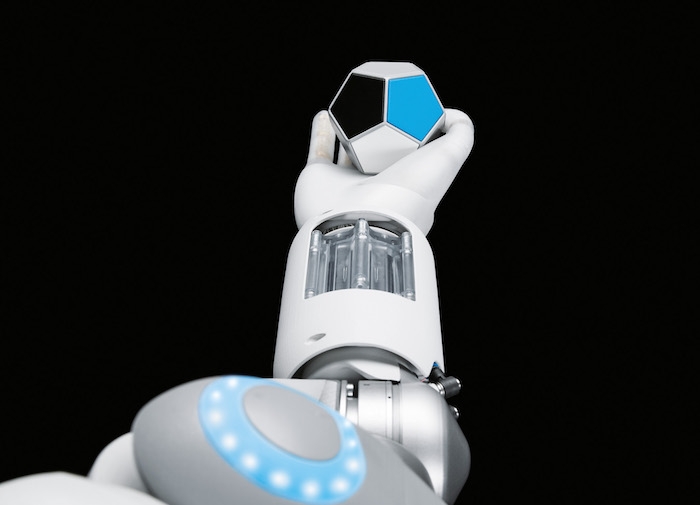 April 30, 2019 – Between collaborative robots (cobots) and artificial intelligence, humans and machines are working together more closely than ever before.

Now, there’s a new machine that emulates humans in a physical way – Festo has developed a cobot gripper modelled on the human hand.

The BionicSoftHand, which uses pneumatics so that it can safely interact with humans, was exhibited for the first time at the Hannover Messe technology fair in April 2019.

The BionicSoftHand has no bones, but its fingers consist of flexible bellows structures with air chambers. The bellows are enclosed in the fingers by a special 3D textile coat knitted from both elastic and high-strength threads. The textile indicates exactly where the structure expands and generates power, and where it is prevented from expanding. This is what makes the hand lightweight, flexible and dexterous, yet capable of exerting strong forces.

“Grasping has been an important topic over the last year,” Dr. Elias Knubben, head of corporate research and innovation for Festo, said in a press conference ahead of Hannover Messe. “We have equipped the hand with sensorics – [there are] inertial sensorics that we use to measure the position, and we also have force sensors inside the hand. The ‘glue’ is that we use artificial intelligence to train the hand.”

To train the hand to do tasks, the developers used a method of machine learning called reinforcement learning, meaning that instead of mimicking specific actions, the hand is given a goal. It uses trial and error to achieve that goal. Based on received feedback, it gradually optimizes its actions until the task is finally solved successfully.

For example, the BionicSoftHand may be told to rotate a 12-sided cube so that a previously defined side points upwards at the end. Using a digital twin, the operator can teach the movement to the hand using data from a depth-sensing camera via computer vision and the algorithms of artificial intelligence. 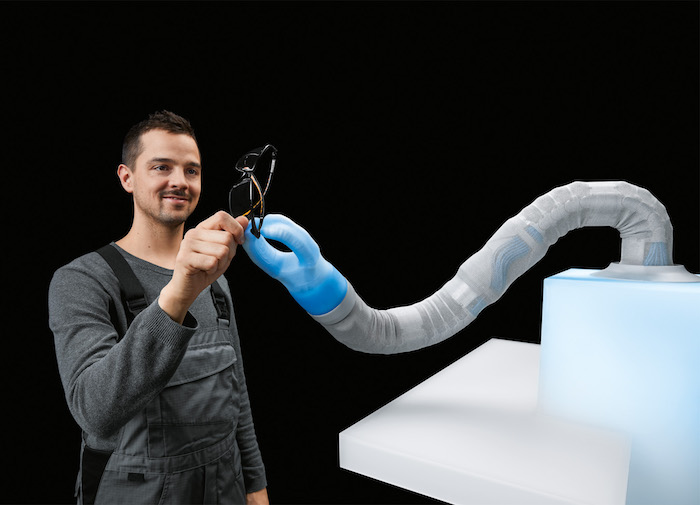 In order to keep the effort of tubing the BionicSoftHand as low as possible, the developers have specially designed a small, digitally controlled valve terminal, which is mounted directly on the hand. The tubes for controlling the gripper fingers do not have to be pulled through the entire robot arm, meaning the gripper can be quickly and easily connected and operated with only one tube each for supply air and exhaust air.

With the proportional piezo valves used, the movements of the fingers can be precisely controlled.

The BionicSoftHand gripper can be used on Festo’s existing robot arms or the brand-new BionicSoftArm, a pneumatic lightweight cobot that builds on Festo’s BionicMotionRobot concept.

The modular BionicSoftArm can be combined with up to seven pneumatic bellows segments (allowing for seven degrees of freedom) and rotary drives for flexibility in terms of reach and mobility. Direct human-robot collaboration is possible with the arm due to its flexible kinematics. It can also be used in classic SCARA applications, such as pick-and-place tasks, depending on the design and mounted gripper.

The BionicSoftHand and BionicSoftArm are the two latest additions to join the Festo bionic family, alongside the previously announced BionicFinWave, an underwater robot shaped like a fish that we first profiled in the Fall 2018 issue of Robotics Insider.