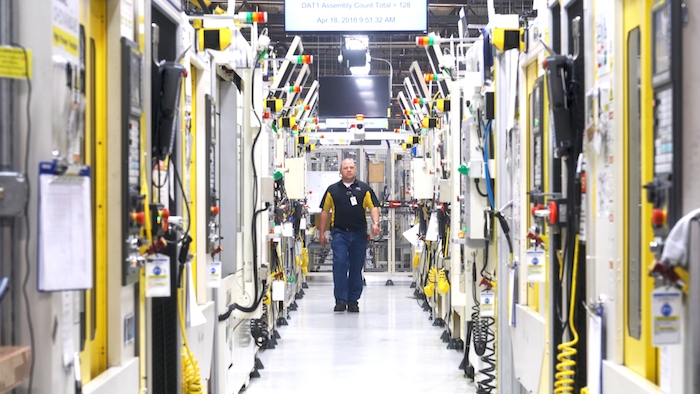 May 6, 2019 – In early 2016, JTEKT Automotive, a Tennessee-based automotive supplier, had a simple goal: Upgrade certain machining capabilities for a new project with a global automotive company.

In the end, JTEKT discovered how a simple project request could blossom into the next level of productivity through new advances in automation.

JTEKT equips one in nearly four cars in the U.S. with a steering system and also supplies the automotive, industrial and aerospace markets under the brands of JTEKT Automotive, Koyo Bearings, Torsen high-performance differentials and Toyoda precision machine tools.

For the upgrade, JTEKT’s engineering team provided a concept and process plan to FANUC America. When the FANUC automation team initially asked JTEKT to allow them to provide automation solution concepts, JTEKT’s management team was hesitant. The fear was that investing in additional automation equipment might be too expensive to implement. In addition, JTEKT had an aggressive timeline to quote the new business along with several other challenges that they needed to solve in order to be competitive.

But the JTEKT team became open to the change when they realized that the recommended solution provided them with more flexibility than their previous systems – and with less maintenance and upkeep.

Communicating the challenges
From the onset, the team needed to address several issues. To begin with, JTEKT’s parent company had worked with local integrators in Japan to develop the existing manufacturing process.

They would build, test and then ship machining cells to the U.S. facilities. This provided the company with first-rate production lines, but at times limited the Tennessee-based facility in its ability to customize its manufacturing needs.

Locally, JTEKT had purchased additional equipment from a number of machine builders, which meant that the manufacturer’s equipment was varied and therefore did not communicate seamlessly with each other.

“Communicating the required signal streams for each machine to communicate with the automation was a challenge with so many overseas machine builders,” says Dennis Schang, JTEKT’s engineering supervisor of diversified products.

Integrating existing equipment
Working together, the team began with a comprehensive review of the part process flow, production requirements and a full audit of the required equipment – not limited to just machining.

FANUC developed a totally integrated system concept that included 3D automation simulation of the process flow, robotic machine loading and unloading capabilities and, most importantly, a better-than-expected production cycle time. All of the equipment within the system would be monitored by FANUC’s custom HMI, allowing for one central location for an operator to access and monitor the system. Each system has over 30 pieces of equipment from many different builders, makes and models.

This very specialized system consisted of two identical machine lines where each line contained five cells serviced with an overhead rail–mounted M-710iC/T robot and an accumulation conveyor, which fed a third line.

Ten applications experts from FANUC came to the JTEKT facility to implement the new automation system, which integrated all of the existing local and international machine tools.

“Machines produced from across the street to around the world [now] all speak the same language,” says Schang. The single-centred machines were each interlocked and monitored from the start of the line to the end, with the process data stored in one location. Therefore, if something is missed, it will be flagged as an error.

Training the staff
To make certain that the new system worked smoothly and to ensure JTEKT’s employees were comfortable using it, FANUC provided training support with an automation class for trainers at the plant, as well as online training so that employees could understand how to properly operate the new equipment.

FANUC’s iHMI provided users with a method to set up standard operations, and to validate the performance of their programs and cycles to make sure they are performing as expected. Since iHMI supports both animated and tool track renderings, it can identify the cause of alarms and then recommend a solution. Recovery notes allow JTEKT’s operators to understand the problem and take the necessary steps for recovery.

“The classes and training really helped our employees to understand how this new equipment and technology could enhance traceability,” says Wayne Young, JTEKT’s production manager. “You don’t miss operations. From a control standpoint, this was a significant improvement to our processes, efficiency and delivery of our commitment to quality.”

Finding new business
Since launching the new system, JTEKT Automotive is now 45 per cent more efficient on labour compared to its counterparts throughout the world. Where previously an operator could only handle four to six machines, that same operator can now run close to 15 machines simultaneously.

Building on the success of its automation solution, the JTEKT team now sees new opportunities for its business. The previous system took up a significant amount of factory floor space, but since many of the robots used are now on the top loader rail, the new system has opened up valuable floor space.

The quality standards and ongoing checkpoints within the new system, as well as a reduction of scrap and waste, helped JTEKT to earn a Superior Launch Award from Toyota, which recognizes the company’s most valuable suppliers. JTEKT was only one of two companies in the U.S. to receive the award.

Rick Graham works in the Powertrain and ROBODRILL Group at FANUC America.