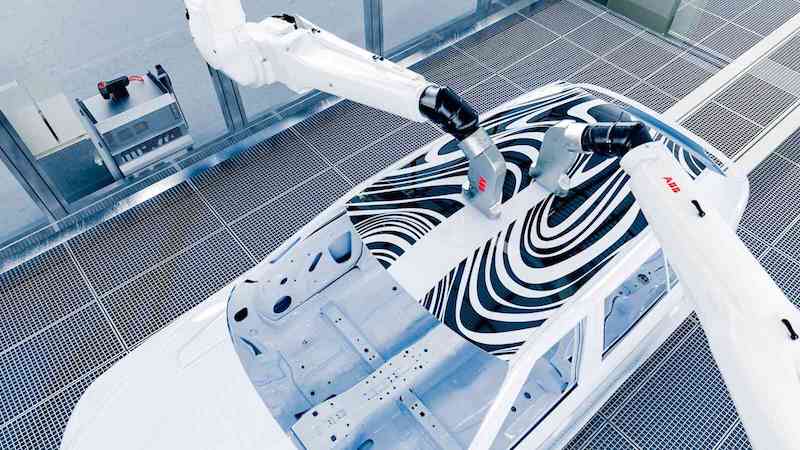 ABB has won the 2021 Award for Innovation and Entrepreneurship in Robotics & Automation (IERA) for its PixelPaint technology.

The IERA Award, in its 17th year, is jointly sponsored by The IEEE Robotics and Automation Society (IEEE/RAS) and the International Federation of Robotics (IFR). The award recognizes innovators with value-creating ideas and entrepreneurs who propel those ideas into world-class products.

ABB’s PixelPaint is one of those products, says the IERA jury. Two high-precision robots make car painting faster with two-tone and customized designs applied in one pass. The technology also eliminates overspray benefitting the environment.

“The innovative solution for automated car painting combines more flexibility and customization with reduced wasted paint for the well-being of the environment,” says Rob Ambrose, jury chair, in a statement.

In the past, 20 to 30 per cent of paint was wasted due to overspray. By contrast, the inkjet head of PixelPaint applies 100 percent of the paint to the vehicle surface.

The technology also significantly increases efficiency in car painting. Previously, in order to apply a two-tone or customized design, the vehicle had to be put through the painting line twice. With the new technology, customized painting speeds increased by 50 per cent. PixelPaint also eliminates the process of masking and de-masking each car, helping to reduce bottlenecks.

Among the finalists were Barcelona-based INFAIMON with the InPicker – a universal pick and place system for industrial applications. Berlin-based Micropsi Industries took part with its MIRAI software – an AI-driven control system that enables industrial robots to deal with variance in production. Mobile Industrial Robots from Denmark presented the MiR250, a user-friendly mobile robot that optimizes material handling workflows across industries.

“I congratulate ABB on winning the IERA award 2021 against strong competition,” says Milton Guerry, president of the IFR. “The four finalists have all presented a success story of an innovative product in robotics and automation which combine the needs of today’s manufacturers with a high degree of user-friendliness.”