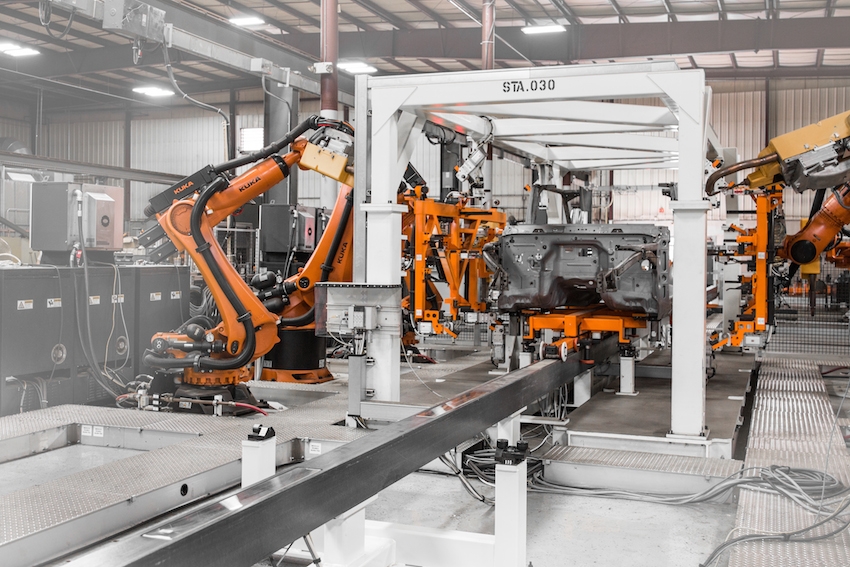 Employing more than 6,000 people, FCA Windsor Assembly Plant produces the 2017 Chrysler Pacifica, Chrysler Pacifica Hybrid and Dodge Grand Caravan. Two-and-a-half years ago, it signed up to be the launch customer for a new body shop transfer system, embracing a new technology from KUKA Systems that promises to be 30 per cent faster than conventional friction-based transfer systems.

Developed and patented in the United States, KS PULSE (Propulsion Using Linear Synchronous Energy) is a body shop transfer system that moves car and truck body sections from robotic workstation to workstation as they are built. It generates electromagnetic force to propel dedicated carriers or pallets along a rail between workstations, designed specifically for automated assembly lines in body-in-white production where the work cycle — the task performed in each station — is between 30 to 60 seconds, says Kevin Laurence, who came up with the original technology concept. Today Laurence is director in charge of PULSE products and development at KUKA Systems.

As the only transfer system that can be deployed throughout an entire body shop, PULSE enables end-to-end process optimization, says Laurence, as it eliminates the need to have multiple systems through the facility. “It can be adapted to all body manufacturing processes, and be engineered to fit atypical building dimensions, like low ceilings.”

Linear synchronous motors — provided by MagneMotion, a developer of modular conveyor systems — in the rail and magnets on the chassis form the core of the system. After placing the ‘bricks’ next to each other and through programming, “they all act like one motor,” says Laurence. “No matter what system we need to build for a customer, we have all the Lego blocks in our toolbox for the track.”

What’s unique about the system is that it is friction-free and completely vibration-proof, Laurence says, and as a result, there are no moving parts to be serviced and zero maintenance needs to be done. The solid state linear motors mean the PULSE line has fewer wear components, such as sensors, connectors and cables, that can fail which improves the overall productivity of a body shop by preventing unscheduled downtime, he says. With no moving parts to generate thrust, Laurence says there is no need to store hundreds of spare parts — taking up precious inventory space — like with traditional transfer systems.

“We could run this with no wheels at all. We could put a piece of UHMW — which is basically a linear bearing without the roller balls — and it would slide on the rail. The reason for that is there is ferrous material inside the motor blocks and then there is magnet on the chassis. There are 1,700 pounds of attracted force that pull those magnets in to the motors and so you need to maintain the 12-mm gap, otherwise it gets stuck to the track. The rollers that maintain the gap are the only moving part on the entire thing,” he explains.

According to Laurence, everything is sized for 15 years, noting that the motors are 100 per cent potted and “based on our duty cycle, it’s about 130 years. None of us will ever be able to prove that but it makes perfect sense if you think about it. It’s an electronic board with some copper coils, and because it’s 100 per cent potted, it’s filled with resin so there are no moving parts.”

A PULSE line can switch among up to four distinct model variations, and its flexible design means it costs “much less” to add a second model-handling capability than it would with conventional transfer systems, notes Laurence. “All you have to do is shoot in the risers and then you bring in the rail and set it on top. Each one of those has six plugs, and because of the configuration file, once you get that loaded, it’s basically just turning the system on. There’s no tuning that has to be done.”

Depending on the application use, customers can choose between the carrier or pallet version. Both systems use the exact same spare parts, keeping the inventory as small as possible, which “makes the lifecycle cost very attractive,” says Laurence.

Automotive installs
Since installing the carrier version of the PULSE system, the FCA Windsor plant says it has seen a production increase in the body shop. PULSE, according to a FCA press release, was integrated into the line where the inner and outer body side panels are “married” together, adding that PULSE has helped to increase the transfer speed while reducing downtime caused by the previous chain-driven system.

“It brings a part in and drops down to traditional tooling. We didn’t upset how our customer likes to build cars, just because we’re transferring it with PULSE technology,” says Laurence, describing the project in Windsor.

The PULSE installation was part of an extensive multi-billion-dollar overhaul to transform the Windsor body shop into a state-of-the-art facility — more than 80 per cent of the body shop equipment is new or has been modified. After proven success with the Windsor line installation, Fiat Chrysler has ordered another PULSE installation as part of its Sterling Heights plant retool in Detroit, Mich., to build the next generation of RAM 1500 light trucks.

Meanwhile, Jaguar Land Rover has selected PULSE to be its main transfer system at its new 300,000 m2 manufacturing facility in Nitra, Slovakia, becoming the first plant in Europe to implement the system. With an annual capacity of 150,000 vehicles, the plant will produce a range of all-new aluminum JLR vehicles. The first cars are scheduled to come off the production line late next year.

Technological advances
“There have been many leaps in manufacturing history, like assembly lines, automated machines, robotics, digital control,” says Laurence. “In KUKA’s opinion, PULSE is the next big leap. It’s faster, safer, uses less electrical power, requires minimal maintenance, is more reliable with hardly any downtime, and requires only a fraction of the spare parts needed with traditional systems. [It’s] is the most technologically advanced transfer system in the world.”

PULSE first came to be when a customer approached the company for a new solution to fit their specifications.

At the 2007 KUKA Toolbox global summit, Laurence and his team began developing the technology as an in-house research and development project.

In 2013, PULSE entered the laboratory testing phase, and after Laurence and his team ran 1.2 million test cycles, PULSE officially launched in 2015.

“There is about $6.5 million dollars worth of equipment to test in the test lab. We made sure that what we’re selling is actually going to work. Every component that’s in here is represented in a body shop.”

The test lab duplicates the exact framer that operates KUKA Toledo Production Operations (KTPO). Located in Toledo, Ohio, KTPO builds the body-in-white of all Jeep Wranglers sold worldwide and in August, surpassed its two-millionth production milestone. A PULSE line is set to be installed during the KTPO plant makeover next year.

“The whole goal in developing this was, we knew this [would be] new technology and that everybody is going to be afraid of it, so it [has] to be way better in every aspect of the job,” says Laurence. “The body shop is like a chain, if one link breaks, the whole body shop is down.”

“We knew the PULSE system had to be great,” adds Mike LaRose, executive vice president, KUKA Systems. “We had to make sure the system was bulletproof.”

Laurence explains that PULSE can make a 22-foot movement of a 1,500-pound payload between two consecutive stations in 3.2 seconds, an improvement of up to five seconds over legacy transfer systems. The savings in time means there can be a reduction of process equipment — fewer stations, robots, fixtures, weld guns and other components.

“That’s the genius of what Kevin and his team have done, PULSE is faster than any technology available with better accuracy,” says LaRose.

This article was originally published in the October 2017 issue of Manufacturing AUTOMATION.